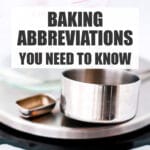 Some recipe writers will spell out the units of measure in their recipe, others may use abbreviations. Here's a rundown of the commonly used baking abbreviations you need to know to tackle most recipes!

Abbreviations are commonly used in recipes on the internet and in cookbooks, which can be confusing if you aren't familiar with them.

Consult this list if you run into an abbreviation you aren't familiar with and bookmark it for later when you need it most! And remember that, when in doubt, you can also find a list of baking vocabulary and French baking terms if you aren't sure about some of the terminology!

Europeans follow the metric system, where lengths and distances are expressed according to the metre, whereas North Americans tend to measure distances according to inches and feet:

Time is also abbreviated in many recipes

If you bake sourdough, you might want to know that sometimes sourdough is abbreviated "SD" and that "DO" is the abbreviation for the Dutch oven that home bakers use to bake sourdough breads.

Now that you are familiar with the commonly abbreviations used in baking recipes and cookbooks, you can also consult the baking conversions chart if you ever need to convert recipes from volumes to weights, or vice versa!