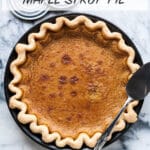 This super easy maple syrup pie is made with a simple food processor all-butter pie dough and has a maple syrup filling that just requires a little whisking before baking! This pie needs to chill so you can make it the day before serving it.

I am a huge fan of maple syrup, which is a pantry staple for those of us who live in Quebec, the province that produces the best maple syrup. Maybe I'm biased since I live in Montreal, but I have heard from a few people living in Ontario that Quebec maple syrup is superior.

One of our favourite ways to enjoy maple syrup, besides in maple fudge, is in a maple syrup pie, which is usually served in the spring during sugaring off season and the months when maple syrup is produced (March and April). 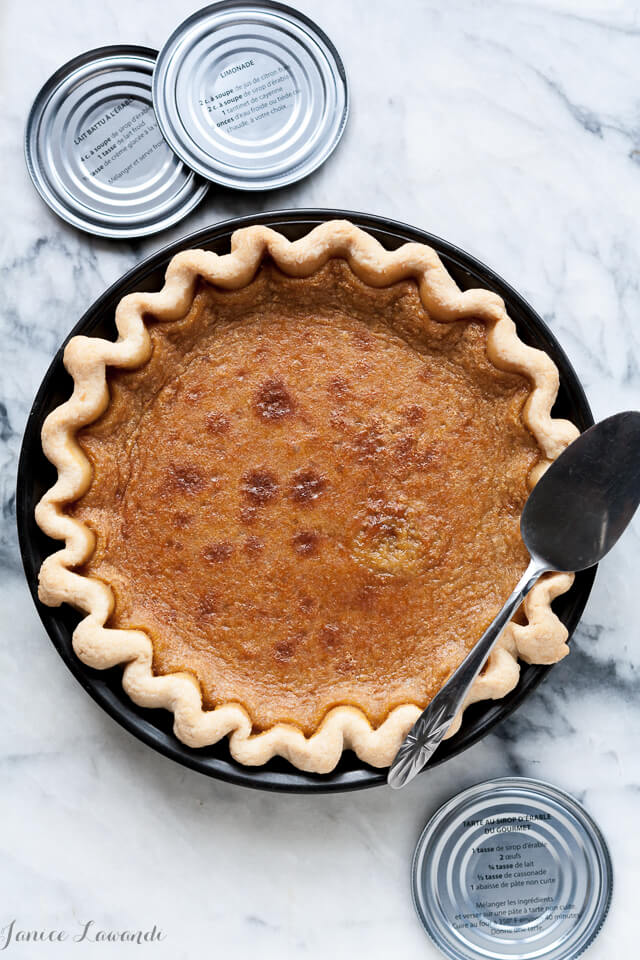 What is a maple syrup pie?

A maple syrup pie is also referred to as a maple pie or even a sugar pie. Maple pie is traditionally a single crust pie with a filling made of eggs, maple syrup, milk or cream.

For this maple pie, I used a combination of maple syrup and maple sugar. Some recipes also add a little flour to the maple pie filling which acts as a thickener and also ensures that the consistency of the filling is more even throughout the pie after baking. Without the flour, you may notice a little maple syrup between the filling and the baked crust.

Whether or not you add flour to the filling is a matter of personal preference. Maple pie is, by far, one of my favourite maple syrup recipes.

How to make maple pie

Maple pie is as easy to make as most single crusts pies, like these pumpkin tarts or this apple butter pie:

For stress-free pie baking, make the all-butter pie dough in the food processor

This crust is made with my go-to all-butter pie dough made in the food processor, made with Stirling Churn 84 butter. Sure, you could use a pie cutter to incorporate butter and flour, instead of a machine, and you could just use your fingertips and no tools. Personally, I love how easy it is to make pie doughs in the food processor. The pie dough rolls out beautifully and the resulting baked pie crust is flaky enough.

What to do with pie dough scraps

The  maple filling is adapted from a recipe printed on the lids of some cans of Quebec maple syrup. The original recipe called for brown sugar, but I used maple sugar because I didn't want any other sugar flavours interfering with my beloved maple. The filling is like a maple custard that is perfectly set, smooth, and very maple-y. I encourage you to serve this pie à la mode with homemade vanilla bean ice cream.

If you are looking for a more traditional fall fruit pie that also has lots of maple syrup flavour, try my maple apple pie. Or if you hate making pie dough, you might prefer this maple apple clafoutis recipe.

This maple pie recipe makes a great maple-flavoured sugar pie. I baked this pie on the bottom rack of my oven, without blind baking the shell first, and it was baked just enough on the bottom. I appreciate being able to skip the blind baking step. Ain't nobody got time for that! 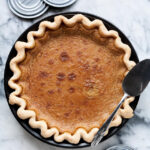 For the maple filling

Other recipes to make with maple syrup

Maple syrup is such a unique source of sweetness that adds so much flavour to recipes. Maple syrup tastes great and can be used to make: