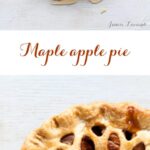 As much as I love ALL pie, I hate when I bake a double crust apple pie and when I pull it from the oven, I find that the filling has shrunk down a good inch or two from the puffed top crust, creating a big gap between the crust and the filling. How do we bake an apple pie without that big gap?

The answer is to soften the apples first. There are a few ways to do so to yield soft and pliable fruit that you can pack more tightly into a double crust pie:

For this pie, I started with 12 cups of sliced apples (that's 4 pounds of whole apples!). Yes, you read that right: TWELVE cups of apple slices. I roasted the slices for about 45 minutes. They didn't appear to have shrunk that much, but when I compared the volume of apple after baking, I realized I was left with a lot less, like 4-to-5-ish cups. That seemed just crazy to me but I had "so little"  roasted apple that when I later filled the pie plate with the apples, it filled the crust snuggly without having to make a big mound in the centre.

Imagine having to pile 12 cups of apples in a pie for a second. That'd basically be impossible had I not roasted the apples first. Perhaps the only plausible way to get all those raw apple slices into a pie would be to make a pie in a deep dish springform pan, arranging them ever so neatly to avoid any wasted space and gaps. Maybe that would work. Maybe.

APPLE PIE TIP roasting apple slices prior to making pie softens the fruit so that the filling doesn't shrink so dramatically as it bakes!

Pre-cooking the apples for pie makes the perfect apple pie. The pie cuts beautifully, and there is hardly a gap between the top crust and the apple filling. The filling has an intense apple flavour that isn't masked by a thickener because there's hardly a need for a thickener here. Fine, it takes an extra hour (when you count the time to cool the apples) to prep the apples, but I think it's absolutely worth it.

Roasting the apple slices not only allowed me to cram the equivalent of 4 pounds of apples into one pie (woah!), but it also meant that I only had to mix in 2 tablespoons of flour to thicken the filling (instead of at least 5 had I not roasted the apples first). Basically, this technique prevented any extra ingredients getting in the way of the apple flavour in this pie.

Instead of using traditional brown sugar or granulated sugar for apple pie, try using maple sugar instead! Maple pairs so well with apple and makes another great maple syrup recipe. I sweetened the apples with a little maple syrup before roasting, and then to make the pie I added maple sugar (you can buy it on Amazon), yielding the ultimate maple apple pie.

This pie top cutter from Nordic Ware is super handy for making a decorative top crust quickly. It's basically a giant cookie cutter for a pie top. Because of its intricacy and its size, it's a little tricky to use because you have to be sure to press evenly and hard enough to cut through the dough. Make sure your rolled out sheet of dough is cold to make cutting easier. Press firmly and evenly all over. Use a rolling pin, rolled back and forth over the plastic cutter to put even pressure all over so you cut through the dough.


What to do with pie dough scraps

While there's nothing quite like this maple syrup pie or an apple butter pie, this maple apple pie is a great bet for those looking to bake with fall fruit.

Short on time? Try this quick and easy recipe for apple crisp instead! 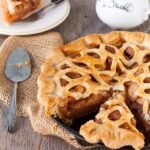 You can buy maple sugar in many markets and grocery stores in the New England area and the provinces of Ontario and Quebec. You can also order it online from Amazon.
Tried this recipe?Mention @bakesomethingawesome or tag #bakesomethingawesome!