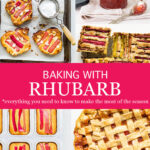 What do you make with rhubarb? Rhubarb is a pretty unusual ingredient. Some love it, others hate it. I'm obviously Team Rhubarb.

Sure, you can make a strawberry rhubarb pie, which is a classic, but what else can you make with rhubarb? It's a question I get asked a lot. In fact, last spring, Susan Semenak of the Montreal Gazette even called me to talk about rhubarb for an article in the newspaper. She interviewed me about rhubarb because she noticed on my Instagram page that I had baked a unique moist rhubarb cake, and that I had roasted rhubarb to serve with waffles.

How to grow rhubarb

You can order rhubarb plants online or pick them up at your local greenhouse in spring. Your local greenhouse will generally sell rhubarb planted in a pot with stems already sprouted up. If ordered online, rhubarb may come as a dormant root that has to be soaked to hydrate it before planting. Choose a spot for your rhubarb plant that has lots of sun because rhubarb likes full sun even. You should plant the root a couple inches underground and if you are planting several rhubarb plants, plant them several feet apart because although they may be small now, rhubarb plants will soon grow very wide and since the plants yield a lot of stems with very large leaves, you should leave 4 or even 5 feet between plants.

I looked into growing redder rhubarb varieties quite a bit when I was ordering a new plant a few years back. If you want very pink or red rhubarb, you need to plant one of the following rhubarb varieties: Crimson Red, Macdonald, or Valentine. Often at the market and grocery stores, you will find greener varieties sold because the plants are hardier and easier to grow, whereas red varieties might require more upkeep. Hothouse and forced rhubarb tends to be pinker or redder in colour. Where I live, it's hard to find growers that do this though.

How to harvest rhubarb

The same summer you planted your rhubarb, you shouldn't pick it much at all, so only snap off 10 to 25% of the plant maximum to allow the plant to become established the first year and to grow strong. Then every subsequent year, you can pick a little more and more, until the plant is strong and vibrant, at which point you can pick as much as you want, leaving behind just a few stems.

When picking rhubarb, grab each stalk from the base and pull/twist slightly to snap it off the plant. You pick rhubarb by plucking the stalks from the plant. Don't cut them off. Plucking apparently signals to the plant to grow more.

How to shop for rhubarb

When you are buying rhubarb at the market or a grocery store, favour stalks of rhubarb that are unblemished and undamaged. Rhubarb stems should have bright colours, from light green to vibrant pinks and red. Freshly picked rhubarb should be firm, perky, and strong, whereas rhubarb that was picked a long time ago will become limp, soft, and bendy, just like old celery. Pick the rhubarb that is freshest.

How to prepare rhubarb

When you harvest rhubarb, here's what you do next:

Did you know that rhubarb is a vegetable, not a fruit? Even though, rhubarb is used predominantly in baking and sweet preserves. It's sour and astringent, and tends to break down when cooked. Greener varieties are more tart, as a rule. Some bakers like to neutralize the oxalic acid and its astringency by mixing rhubarb with a base, like baking soda, a commonly used baking ingredient.

There are so many great recipes that feature rhubarb. Here's a roundup of some of the best rhubarb recipes you can bake to make the most of the rhubarb season.

Rhubarb in crisps and crumbles

You can transform rhubarb into jams and jellies. Whatever you prefer, rhubarb preserves are a must so you can still enjoy rhubarb and memories of summer in the dead of winter. Here are two options to get  you started: