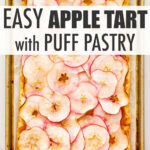 Learn how to make a puff pastry apple tart with this easy recipe and step-by-step photos. You can use frozen pre-rolled puff pastry sheets from your local bakery or grocery store. This is a slab tart that is cut into squares to serve.

Puff pastry apple tarts are my favourite. They are so easy to make, especially if you can get sheets of frozen puff pastry that are already conveniently rolled out.

A French apple tart made with puff pastry is also called "tarte fine aux pommes" because it is a slab tart, fairly thin, made with thin slices of apple.

What you need to make this recipe

To make this easy apple dessert, you will need:

Of course, you can use homemade puff pastry for this recipe, but that can be quite time-consuming. And for something like this, I prefer the convenience of a roll of frozen puff pastry from the local baker. They sell it in rolled up sheets that are so convenient. Just make sure that it's an all-butter pastry so that it's more flavourful.

If you don't want to use apples, you can try using pears. The results will be similar. Depending on the variety, you may need more pears, which tend to be smaller than apples.

How to make a puff pastry apple tart

This is a French apple tart with puff pastry, apple compote, and sliced apples. There are three components to this dessert (not counting the glaze) and so there are three major steps involved in the preparation:

Whether you roll out a block of puff pastry with a rolling pin, or unroll a sheet, you will want to trim it to fit your sheet pan. I used a pound of puff pastry dough to fit a 10x15 sheet pan lined with parchment.

Docking the sheet of puff pastry before topping it is going to help stop the dough from puffing out of control in the oven. When the puff pastry bakes, steam will form between the layers of dough as the butter melts. The holes will help release some of that gas so that the pastry bakes flat.

Of course, the weight of the toppings also helps weigh down the puff pastry, but it's not enough weight to prevent the dough from puffing in the oven. Keep an eye on the tart as it bakes and if you ever notice a section puffing upward too much, take a pairing knife to pierce the bubble before the pastry sets.

Also, don't forget that puff pastry needs to be kept cold. So always keep the dough in the fridge when you aren't working with it.

While for some caramel recipes, you'll start with water and sugar in your saucepan, this apple compote is made the classic way, starting with a dry caramel, meaning no water in the pan. Taking the time to make a dry caramel is one of the distinguishing features of French apple tarts.

The sugar is poured directly in the saucepan and heated until it melts completely into a fluid, clear syrup of pure melted sugar. You then caramelize the syrup to develop the flavour before "deglazing" with a little butter, which adds flavour and a creamy finish to the compote.

Making a dry caramel, you may discover you have less issues with the sugar crystallizing than the methods with water. But while crystallization is less of an issue here, the caramel is more prone to burning and smoking, so be aware of that.

I keep the heat on medium so that I can give the sugar enough time to melt before it starts to colour. Another method is to gradually add the sugar to the hot saucepan, but in this recipe, the quantity you are caramelizing is so small, I find it easier to start with all the sugar in the pot and to play with the temperature of the stove.

Another trick to preventing burning is to keep swirling and tilting the pan so that the sugar is always moving. This way if your pan has any hot spots, the sugar won't burn in place.

Once the dry caramel is made, you add the chopped apples, which cook down, becoming very tender and soft. I like to use Cortland apples or any apple that can withstand heat without breaking down. This way the compote has a little more texture to it.

Cooking the apple filling removes the water from the filling, which boils off. This helps ensure that your puff pastry will be nice and crispy, not soggy.

Assembly is easy and the fun part. All you have to do is smear the puff pastry from edge-to-edge with apple compote and layer the sliced apples. Make sure that you create an even layer of apple, either arranging them decoratively or in even rows. Make sure the compote is completely covered.

Hint: Use a mandoline to slice the apples into perfectly even slices, but be very careful and use a guard to protect your fingertips!

Take the time to arrange your apple slices so that they line up nicely in neat rows or in a more haphazard, but intentional layer. The goal is to cover the entire tart, from edge-to-edge with a perfectly even layer of apples. Spend time on this step to make it look nice!

The classic French apple tart with puff pastry is truly an ode to apples: it's a simple apple dessert with no spices or flavour elements to interfere with the fruit. Still, that doesn't mean you can't get creative, specifically with the compote:

See this maple apple pie, which proves how good the combination of maple and apple is!

To make this recipe, you don't need much in terms of equipment, and certainly nothing special.

Get my bakeware recommendations on Amazon.

Apple tarts made with puff pastry are best eaten the day they are baked. Like most recipes with puff pastry, they don't store well. It won't go bad quickly, but the crispy puff pastry crust will soften after a day. The texture and flaky pastry eating experience will be different if stored overnight, for example.

I don't think this tart would freeze well either. It's best baked and eaten on the same day.

While Americans tend to serve apple pie with vanilla ice cream, French apple tarts aren't usually topped with anything. But I won't judge you if you feel like serving this easy apple dessert to your guests à la mode! This cardamom ice cream would be great or in the fall, this pumpkin ice cream! 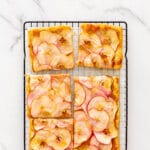 Prevent your screen from going dark
Learn how to make a puff pastry apple tart with this easy recipe. You can make it with a sheet of store-bought puff pastry, and then top it with a caramel apple compote and sliced apples. This tart is cut into squares like a slab pie!
Course Dessert
Cuisine French
Keyword French apple tart, puff pastry apple tart
Prep Time 20 minutes
Cook Time 1 hour 5 minutes
Total Time 1 hour 25 minutes
Servings 8
Calories 442kcal
Author Janice

You may need more or less sliced apples, depending on their size, in order to completely cover the tart with an even layer of fruit. Better to slice a little extra and snack on the leftovers, rather than run out! For the photo, I sliced whole apples (with the peel) to arrange on the top of the tart, but you can also core and peel the apples for a more traditional, neater look. Aim to slice the apples quite thin, around 3/16 inch (0.5 cm) thick. To prevent the sliced and diced apples from browning, you can store them in a bowl of lemon water as you prep all the apples. When you are ready to use them, drain them well.
Tried this recipe?Mention @bakesomethingawesome or tag #bakesomethingawesome!