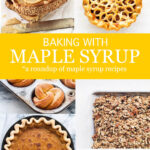 Maple syrup makes a great topping for pancakes and waffles, but there are so many other uses for maple syrup! Here's a crash course in what maple syrup is, the forms of maple sweetener on the market, and some of the best maple syrup recipes you can bake at home to celebrate maple season year-round.

How to make maple syrup

If you want to make maple syrup, you will need a forest of maple trees and a specific climate found in parts of the New England area, like Vermont, and also parts of Eastern Canada, like Quebec and Ontario. Maple syrup is made from the maple water/sap of the maple tree. In spring, the water/sap rushes up from the roots to feed the budding branches that were dormant all winter. The liquid is collected during a brief period of spring, when the nights are cold and the days are warm, so usually during the month of March, though the season may start as early as the end of February and may extend into early April. During this period, the water from the earth rises up the trees at night when it's cold, then flows down during the day when it's warm. Sugar maple trees are tapped and a spout is attached to each to collect the sap as it rises and falls.

The collected sap is boiled down to remove water and concentrate the sugars and flavours. To make pure maple syrup, you need 150 litres of maple sap (40 gallons) to make 3.8 litres (1 gallon) of maple syrup. I have visited a few maple farms and sugar shacks over the years and seen the process, but I've never attempted it myself at home. I honestly don't have access to a small forest of maple trees and I'm pretty sure tapping municipal trees in the park is a no-no. That being said, if you happen to be blessed with a backyard of maple trees and live in the New England area, Quebec, or Ontario, you can read all about making maple syrup in your backyard on Simple Bites!

Grades and classes of maple syrup

The flavour of maple syrup (the concentrated sap) reflects its origins, with woodsy, earthy notes. Only Grade A maple syrup is sold in stores in Quebec and it is made from pure maple sap with no other colours or flavours added. It's the real deal! You can buy four different classes of Grade A maple syrup in stores, each representing a different concentration of syrup, from the lighter syrups which have a milder flavour and a more clear, light colour, to very dark syrups which are very concentrated with a strong maple flavour:

Though maple syrup is the most common, well known form of maple on the market, there are other maple products available that you can buy:

Maple syrup works very well in baking recipes and personally, I like to bake with Amber Grade A maple syrup because it has a pronounced but not overpowering flavour. I find the golden maple syrup is too delicate to stand out in baked goods, while the darker syrups are too robust. There are a few things to consider when using maple syrup as a sugar substitute in baking:

Given that maple syrup is a liquid sweetener and contains some water in it, you cannot substitute granulated sugar for maple syrup without making certain adjustments to the recipe. Baking with maple syrup may lead to a slight difference in texture and will have a noticeable impact on flavour. You may have to adjust the temperature of your oven when baking with maple syrup, reducing it by 25ºF. As a rule:

Maple butter, also known as maple cream, is a creamy spread that is 100% maple syrup and nothing else. Don't be fooled by those quick maple butter recipes that are basically sweet, maple-flavoured compound butters made by whipping maple syrup with butter. That is not the same thing! Maple butter is great spread on toast for breakfast, but feel free to make maple sandwich cookies by sandwiching a dollop of maple butter between shortbread cookies!

The classic sugaring-off dessert in Quebec is tarte au sucre, also known as sugar pie, maple pie, or maple syrup pie. Maple pie is one of my favourite pies and it's actually quite easy to make at home, with an all-butter pie crust that is whipped together in the food processor, no blind-baking required, and a filling that is simply whisked before pouring into unbaked pie shell and baking. Maple syrup pie is such a treat! We make it in spring, during maple season, but also in the fall, many will serve maple pie for Thanksgiving.

In my family, we tend to make traditional maple fudge around the holidays because that's when you have a lot of guests over so you can share the fudge and avoid eating it all by yourself. Maple fudge is delicious, but best served in small pieces for sharing because it is quite sweet. Some people prefer creamy fudge, but I like it smooth with just a hint of grit to it from the crystallizing sugar. By the way, the walnuts in the recipe are entirely optional.

Use maple syrup in your favourite granola recipe and I guarantee you will love it even more! Pro tip: if you press the unbaked granola into your baking sheet before baking, you will end up with perfect granola clusters.

If you think maple syrup makes a great topping for pancakes and waffles, try this apple maple syrup with chunks of apple in it. I bet it would taste great poured over this Dutch baby pancake recipe too!

If  you would like to read more about maple syrup, consult the Maple From Quebec website and the Pure Maple From Canada site!