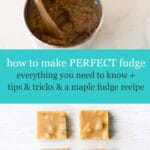 Here's everything you need to know about how to make fudge without condensed milk, including what can go wrong, tips and tricks, and how to salvage a batch of fudge that didn't work out as planned. I've included a maple fudge recipe, which is a traditional, old-fashioned fudge made without marshmallows or condensed milk. It takes a little patience, the right tools, and some precision to make fudge but the resulting fudge is well worth the effort! The nuts are entirely optional.

What is traditional fudge?

I love traditional maple fudge with walnuts. It's a classic candy treat that is usually made around the holidays (or just because). Fudge is mostly made of sugar and whipping cream. Some will make it with condensed milk or marshmallows, but for old-fashioned fudge, it's brown sugar, granulated sugar, a little maple syrup for flavour and whipping cream.

Maple fudge is quite sweet, but I love that fine granular texture that good fudge has. This is one time when you want the sugar to crystallize, as opposed to caramels or caramel sauces when you are trying to prevent caramel from crystallizing. But fudge has to crystallize just right, like for this maple butter recipe. Maple fudge, like maple butter, should have very fine crystals that give fudge the perfect amount of "grit", not dry or crumbly, which makes it utterly addictive, but still soft but not so soft that it has the texture of maple butter.

You can add chocolate to fudge. I have another recipe for white chocolate maple fudge from years ago that is made with maple cream and finished with white chocolate, which gives it a lovely creamy taste and texture but the recipe can be a little finicky, especially when it comes to adding the white chocolate. Do that wrong and the chocolate may burn...

How to make fudge

Troubleshooting: Things that can go wrong when making fudge and fudge-making tips & tricks

Making fudge is really about controlling when and how the sugar crystallizes. If you make a mistake along the way, the texture could end up too dry or too soft.

Fudge is crumbly—sugar mixture was overcooked and boiled too much

When making fudge, the temperature you cook the sugar to has a direct impact on the texture of the fudge. You are aiming to bring the sugar mixture to 115 ºC (240 ºF), which is the soft ball stage. At this temperature, you have evaporated just enough water to make firm fudge, but not so much water that the fudge is dry and crumbly, or brittle. If your fudge ends up dry and crumbles or is super granular, the fudge was overcooked. If you boil fudge too long, your fudge will have a dry, crumbly texture

How to avoid overcooked fudge

One of the reasons your fudge might end up overcooked is you don't act fast enough when the fudge has reached the correct temperature of 114–115 °C (237–239 °F). As soon as it reaches this temperature, pull the pan off the stove immediately (before you even shut off the burner). And focus on getting it into a cold water bath fast because otherwise, the heat of the pot might continue to cook the fudge. If the fudge mixture gets just a few degrees to hot (like to 118 ºC, or 244 ºF), the fudge will be overcooked. It's best to be prepared with a water bath ready and to act fast.

How to salvage fudge that was overcooked

You can salvage overcooked, dry and crumbly fudge by breaking down the dry fudge and crumbling it, putting the fudge back in a saucepan with up to 60 ml (¼ cup of 35 % cream). Heat the mixture on medium–low and stir to melt/dissolve the fudge into a smooth mixture, then bring the mixture to a boil and heat it to 114–115 °C (237–239 °F). At that point you have to go through the steps of cooling the fudge and then stirring vigorously before pouring it out in a prepared pan to allow it to set.

Fudge is too soft—sugar mixture was undercooked

How to avoid undercooked fudge

One of the reasons your fudge might end up undercooked is you that the fudge mixture wasn't cooked to a high enough temperature of 114–115 °C (237–239 °F). You need to boil the fudge mixture long enough so it reaches 114–115 °C (237–239 °F). At this temperature, much of the water has boiled off and the sugar is concentrated enough to crystallize and set properly when cooled. Some recipes will recommend a timeframe for how long to boil the sugar mixture, but I don't think this is a reliable method for making fudge because your stove is different than my stove. It might take me 20 minutes to reach 115 ºC but it could take you less time (or more time). This is why it's important to use a candy thermometer to make fudge and to monitor the temperature.

How to salvage fudge that was undercooked

You can salvage undercooked, soft fudge that doesn't set by putting the fudge back in a saucepan with up to 30 ml (2 tablespoon of 35 % whipping cream). Heat the mixture on medium–low to dissolve/melt the sugar. Once you have a smooth consistency, then you can bring the mixture up to a boil and make sure to continue to heat the mixture until your thermometer reads 114–115 °C (237–239 °F), at which point you must cool the mixture back down before beating it.

Fudge is too gritty

If you notice that your fudge is much too gritty, it could mean that you didn't allow the fudge mixture to cool enough and therefore you beat it too soon. If you beat the fudge when it is too warm, the sugar will form bigger crystals and won't be smooth. It's important to wait until your fudge is below 50 ºC before stirring vigorously, just like when you are making homemade maple butter.

I hope this traditional maple fudge recipe is simpler and satisfies your maple fudge cravings. Remember it's quite important to use a good, reliable candy thermometer preferably an instant-read thermometer, if possible, because cooking temperature is EVERYTHING when you are making fudge. If the temperature is off, your fudge may set too soft or end up too dry. All roads lead to something tasty, but getting the texture right is nice too!

If you are looking for more to bake with maple, check out these maple syrup recipes. 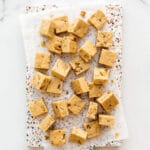