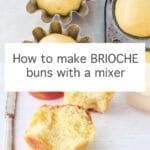 Brioche is a fluffy, buttery bread usually served at breakfast, made from a yeasted dough enriched with eggs and lots of butter. Here's a recipe for how to make this easy brioche bread at home using a stand mixer, with info about how much to knead brioche dough and the pans you can use to bake brioche. 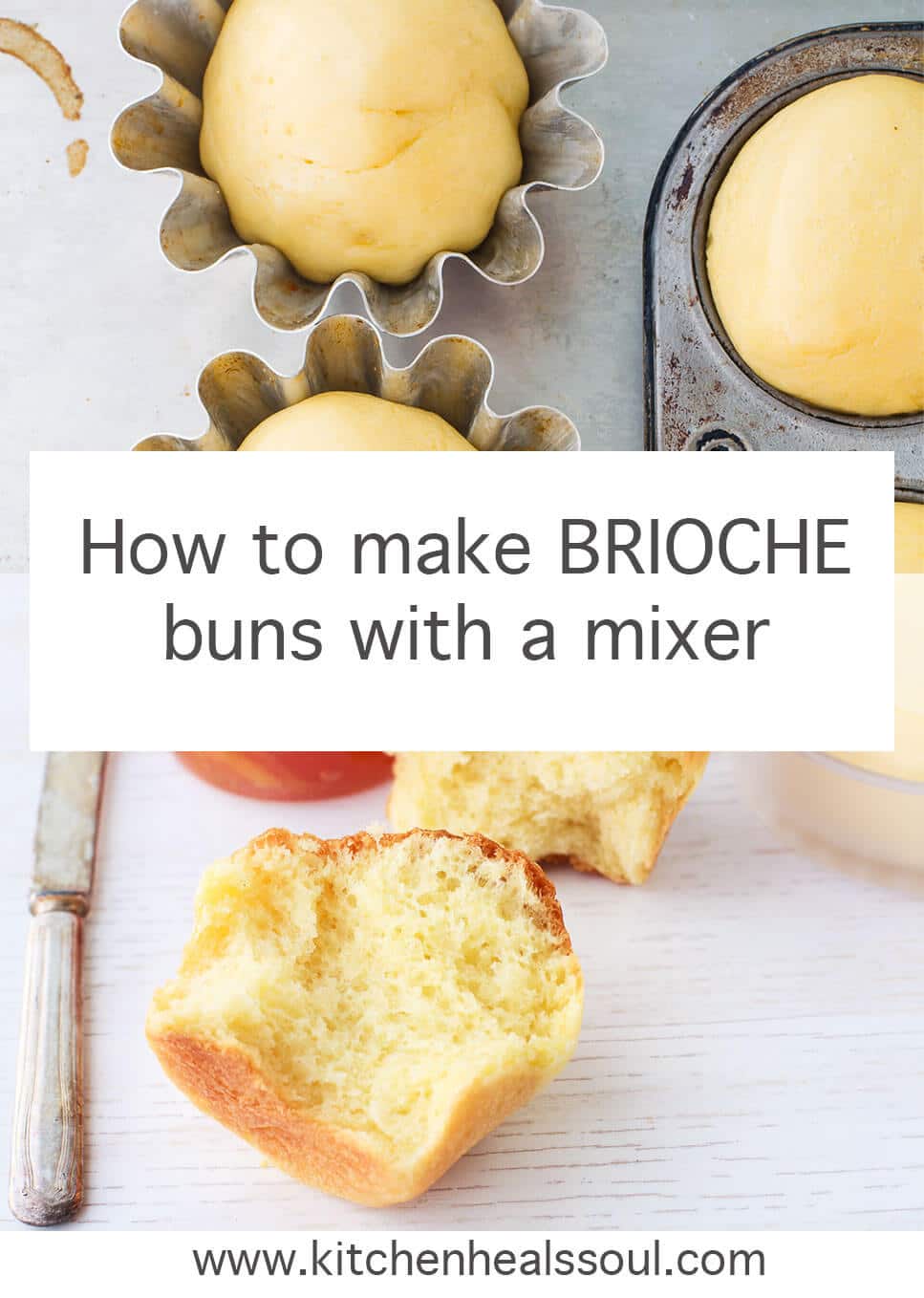 Brioche is different than croissants

Both brioche and homemade croissants are made with a lot of butter, but the technique to make them is quite different, leading to completely different textures. When you bite into a really good croissant, the flaky layers will inevitably make a mess. The flaky layers come from laminating the yeasted dough, where a slab of butter is worked into the croissant dough to form very fine layers. These layers of butter yield a flaky, airy texture, and the steam, along with the yeast, both act as leavening agents in croissants.

Brioche is also a buttery bread, but instead of creating fine layers of butter for a flaky texture, the butter is completely incorporated into the yeasted dough, yielding a pillowy soft, fluffy yet buttery dough. Brioche is very light, not heavy, which is surprising considering how much butter it actually contains. Traditional way of making brioche by slapping the dough by hand

When I learned how to make brioche at Le Cordon Bleu, the pastry instructors taught us how to knead the dough by hand. But the French method for kneading brioche isn't how we traditionally knead dough in North America.

Kneading brioche by hand isn't a gentle but firm massaging/folding of the dough with the palms of your hands. To knead brioche by hand is much more of a workout where brioche dough is kneaded by slapping the dough down onto a marble surface and scooping it back up, over and over again, until you form a smooth dough.

Imagine a kitchen with 15 pastry students slapping dough onto marble. It's noisy, to say the least. It's also seriously messy because before the dough has come together in a smooth cooperative mass, there are stages where it is a loose, disgruntled mess, so bits fly all over the place as you slap it onto the counter. Chunks of dough make it up to the ceiling and possibly into your hair. This kind of kneading isn't really for the home kitchen, well, unless you like to clean dough off of your light fixtures. Kneading brioche dough in a stand mixer like a KitchenAid makes brioche easy!

I got a ridiculous amount of pleasure "kneading" dough using the slap and scoop method in pastry school, but it's just not suited for home kitchens. The good news is that you can make brioche dough in your KitchenAid stand mixer (Amazon) and the results are great!

Using a stand mixer allows you to clean up your kitchen while the mixer does the hard work. And although I love unleashing my stresses onto a poor unsuspecting mass of dough, I have no desire to go searching for that rogue bit of dough that somehow got lost or mixed into a few strands of my ponytail. Kneading brioche dough is less messy.

The 2 stages of kneading brioche dough

For most bread recipes, the ingredients get combined to form a shaggy dough, at which point, you would knead that dough until it forms a smooth, supple, elastic ball of dough. The kneading process is one long step, usually about 6 minutes if you are kneading with the dough hook of your mixer, as you work the dough to build up a network of gluten that is cohesive, elastic, and supple.

For brioche dough, the kneading happens in 2 long stages. The first kneading step happens without any butter and this first amount of kneading is needed to build up the network of gluten. Once you have a smooth, elastic dough, you incorporate the butter into the dough. The butter disrupts the gluten network you formed, causing it to break down. The dough loses its elasticity and so, you have to repeat the kneading to build back that network and strengthen the dough.

The second stage of kneading can take much longer than the first, even double. The goal is to develop elasticity and so you have to knead it until the dough can be stretched without tearing. So if you are wondering how much to knead brioche dough after you've added the butter? The answer is a lot, which is pretty vague. But to check if you've kneaded the dough enough. Pull off a small piece and gently pull on it to stretch it: On day 2 of brioche-making, you shape the dough and let it rise a second time before baking it. This last rise, after you've formed the rounds of brioche, can also take a little more time than you'd expect because the dough is fridge-cold, and it first needs to warm up a bit before it can expand, especially since brioche dough is loaded with butter.

I do the second rise in the oven, but with the oven turned off and just the light on inside. I use this technique to gently warm my bread doughs and get them to rise faster. The oven light warms the oven just slightly, enough to coax the dough back to life, without killing the yeast. Sure, brioche might take two days to make, but this bread, freshly baked, is worth all that time and more. It's buttery delicious, and would be the perfect edition to your weekend brunch, especially because you make the dough the day before and let it rest overnight in the fridge. Brioche buns are easy to make and bake neatly in a muffin tin, but you can also bake brioche dough in a loaf pan to make a traditional "carré". If you want to take your brioche to the next level, try these maple brioche buns, which are shaped like flowers. Or you can bake brioche on a sheet pan as a "tresse" (a braid) by splitting the dough into 2 or 3 and twisting (or braiding) it into a loaf before placing it on a parchment-lined sheet pan to rise and bake. In this case, you don't need a special mould.

Traditionally, brioche buns are baked in fluted moulds (you can see them in the picture above). These fluted brioche pans are available on Amazon. Since many don't have access to these pans, you can also bake the buns in a muffin tin, as shown. You just won't get the fluted edge, but that's okay! For a full loaf, bake this bread in a loaf pan like this 8.5x4.5" gold touch pan from OXO on Amazon 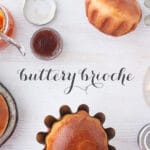 Easy brioche kneaded with a mixer

Prevent your screen from going dark
Brioche might take two days to make, but this bread, freshly baked, is worth all that time and more. It’s buttery delicious, and would be the perfect edition to your weekend brunch, especially because you make the dough the day before and let it rest overnight in the fridge.
Course Bread
Cuisine French
Keyword brioche made with a kitchenaid, easy brioche
Prep Time 30 minutes
Cook Time 20 minutes
Total Time 50 minutes
Servings 8
Calories 262kcal
Author Janice

How to eat brioche

What to serve with homemade brioche

Brioche buns taste amazing plain, but they are also paired with a few breakfast spreads. It's perfect paired with seasonal preserve, like three fruit marmalade in winter, rhubarb jam in spring, plum jam in summer, or spiced apple jam in fall. Brioche plus jam is heaven.

What to make with leftover brioche « How to prevent caramel from crystallizing
Chocolate pavlovas »