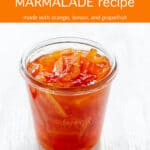 This gorgeous homemade three fruit marmalade recipe is made with oranges, lemons, and grapefruit, using the whole fruit method so nothing is wasted! This easy marmalade recipe without pectin yields a thick marmalade that is not too sweet and not too bitter. It's just right!

Marmalade is a bittersweet preserve made from citrus fruit, usually oranges, though lemon, limes, grapefruit, and other citrus can also be added to marmalade.

Homemade marmalade tastes so much better than most grocery store marmalades, which tend to lack scent and flavour, tasting mostly like sugar. It’s a real treat served with homemade brioche and croissants. Need I say more?

I like to check the temperature as the marmalade boils with an instant-read thermometer. I use a Thermapen which is very fast at registering temperatures and temperature changes, but a probe thermometer with a longer cable like the ChefAlarm would be better because then you don't have to hold it with your hands, which would be much less dangerous to use than my hand-held setup.

What you need to make marmalade

Marmalade recipes are made from a simple list of ingredients:

During the winter season, Seville oranges are prized for their bitter, astringent, sharp orange flavour and high pectin content, which is great for homemade marmalade, but not so great for eating.

But the Seville orange season is quite short, and for the rest of the year, you can make marmalade from any of the common citrus fruits: orange, lime, lemon, and grapefruit. When making marmalades, it's really important to scrub your citrus fruit and wash them really well to remove any dirt or pesticides that may be on the skin.

Any white sugar will work whether granulated sugar, superfine white sugar, or fine natural cane sugar (like this one on Amazon). Fine sugar will dissolve quickly and more readily than a more coarse sugar. You wouldn't want to use coarse turbinado sugar in marmalade because you risk ending up with a marmalade with granular sugar crystals that didn't dissolve properly. I use granulated or fine sugar. That's caster sugar for the Brits among us.

You could also use a combination of white sugar and brown sugar to make marmalade, but remember that brown sugar contains molasses and so the flavour will be noticeably different than marmalade made with white sugar. Make sure the total weight of sugar in the recipe doesn't change.

Do not use jam sugar or gelling sugar in this recipe, which contains pectin and citric acid. You don't need the extra pectin to make this recipe, and it will likely throw off the texture.

If you are following a recipe that says to use 950 grams of white sugar, make sure that you use that amount. On that note, do not try to make a lower-sugar marmalade unless you are following a low-sugar marmalade recipe. Cutting back on the quantity of sugar will have a huge impact on the set of your homemade preserves and can also affect the shelf life. Don't reduce the sugar in a preserve recipe unless you know what you are doing.

Whatever type of sugar you are using, make sure that all the sugar is properly dissolved into your marmalade mixture before you bring it up to a boil to thicken it to the desired consistency.

I do not recommend using any kind of artificial sweetener nor most sugar substitutes to make marmalade (whether stevia, sucralose, or others) because the flavour won't be the same, nor will the stability of the marmalade. Stick with real sugar. You can add honey or maple syrup to your marmalade recipe, but like with brown sugar, I would use it combined with white sugar.

This easy marmalade recipe uses the whole fruit method for marmalades, so the flavour is bittersweet. The steps to making marmalade from whole citrus fruit can be summarized as follows:

You absolutely don't need any special equipment to make marmalade, but I highly recommend purchasing a canning kit, which contains everything you need to process and seal your jars of homemade preserves (namely a big pot for processing jars, a rack that fits in the pot, a non-reactive funnel, a magnetic lid lifter, a tool for measuring headspace and removing air bubbles, and jar lifter tongs).

I have the Bernardin canning kit and it's really made jam-making and preserve-making much easier. Plus it's readily available in Canada. It's important to use heat-resistant and non-reactive tools given the sugar content, high temperature, and acidity level of marmalade. Besides the canning kit, you will also need:

Making other types of marmalade

The steps are quite easy, but I understand that there are quite a few of them. Just remember that unappetizing jar of odourless grocery store brand marmalade. That should be motivation enough to make marmalade at home! And feel free to adapt this recipe and make different marmalade fruit combinations. Here are some marmalade recipe ideas to try:

I think you get the point: start with a solid recipe and make your modifications respecting the amount of citrus fruit and sugar in the recipe. The ratio of sugar to fruit is key so do not deviate too much. As you can see, the ratio of sugar to fruit is very close to 1:1 by weight. If you stick to the quantities as written, your homemade marmalade should taste great and set properly without any issues.

My marmalade didn't set! Now what?

Assuming you followed the quantities in the three-fruit marmalade recipe below, I am guessing you didn't cook the marmalade to the right temperature.

Cooking to just above 220°F–222ºF but not much higher than that is key: if you cook to too high a temperature, you will end up with a very thick, slightly more caramelized preserve, and the peel may become overly chewy if you aren't careful. But if you don't cook to a high enough temperature, you risk ending up with a very runny, watery marmalade, which isn't ideal either.

If you find that, when the marmalade has cooled, it's too runny, you can dump it all back into a big pot and reheat to bring it up to 220–222ºF. Then you will have to transfer to sterilized jars again and reseal, of course. On the other hand, overcooked marmalade cannot be salvage. Overcooked marmalade can still be eaten, but the texture is dry and rubbery.

Yes, you can make three-fruit marmalade from oranges, lemons, and grapefruit with this recipe, using the right equipment and following these instructions!

I used these books to research this recipe and follow Camilla Wynne's methods closely as she taught me how to make Seville orange marmalade years ago. Highly recommend! 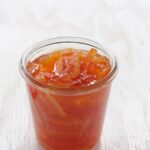