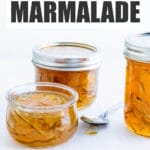 Learn how to make lime marmalade with this easy recipe, which makes a small batch from whole limes, sugar, and lemon juice, and without adding any commercial pectin.

Taking advantage of citrus season is one of the best ways to beat the winter blues, and making marmalade is a fun weekend activity that is so rewarding, especially considering that it's minimal effort. Yes, there are a lot of steps, but there's nothing too complicated:

What you need to make this marmalade recipe

The best way to make lime marmalade is with the whole fruit because it's simple to do and doesn't require any added pectin. All you need are:

Do not use jam sugar, also called gelling sugar, for this recipe. Jam sugar actually combines fine sugar with pectin and an acid (like citric acid) to promote gelling and set when making jams, marmalades, and sugar-based preserves. You do not need extra pectin for this and the other marmalade recipes on this site so please use regular granulated or fine sugar for this recipe!

For this recipe, we are using standard grocery store limes. The variety is Persian or Tahitian limes, at least in North America. They are seedless and not too small, which makes them very easy to handle. These limes are sour with bitter notes.

You could also try this recipe with key limes, also known as Mexican limes. Use the same weight of fruit as suggested in the ingredients for this recipe, so use 650 grams of key limes to make key lime marmalade. Note that key limes have seeds, so you will have to remove them as you slice the fruit.

Surprisingly, you actually don't need anything special to make marmalade at home from scratch. You will need:

For most marmalade recipes on this site, we use the whole fruit method, where you immerse the whole fruit in a large volume of cold water, and bring to a boil, cooking for 1–2 hours, until the fruit is very tender, so soft that you could use your hands to easily tear the fruit apart. With this method, you slice the whole soft fruit, so the cut of the peel can be quite rustic and more coarse, less "refined" than you might want. I used this method to make classic orange marmalade, grapefruit marmalade, and even three fruit marmalade.

The sliced citrus is brought to a boil in lots of water, and it's simmered for two hours, until very soft and tender.

One of the big problems with making marmalade is that the peel can end up hard and chewy if you don't handle the fruit correctly. To avoid this, you have to boil the whole fruit (or sliced fruit in this case, or sliced peel) for over 1 hour, until the peel is extremely tender and so soft you can tear the fruit without using any force. Whole citrus fruit should be so soft you can poke the handle of a wooden spoon or even your thumb through the fruit without any effort. One visual cue for knowing how long to boil sliced citrus is to observe the pith (the white part of the peel). The pith should no longer be opaque and completely translucent. You should see no patches of white from the pith. If any remain, the peel will be chewy.

If you find your water has evaporated before the sliced fruit has cooked long enough, add more water. This will give the citrus peel more time time to cook and then, all you have to do is boil it down again to evaporate off the excess water.

For this recipe, you do not need to remove the pith of the fruit from the peel, but you do need to take the time to properly soften the sliced fruit before adding sugar and proceeding with marmalade-making. If you don't do this step correctly, the peel will be tough and the marmalade will be inedible, unless you strain out the toughened pieces of peel.

How to tell when the marmalade has boiled enough

Once you've added the sugar and the lemon juice, it's time to cook the marmalade. There are many ways to determine if you have hit the marmalade setting point:

If you use a few of these tests and the marmalade passes inspection, you're ready to transfer the mixture to jars to seal them. Remember for some of the more time-consuming tests, you should take the pot of marmalade off the heat or else you risk overcooking it! This is very important and if you overcook the marmalade, it will be dry and pasty, like a fruit candy or verging on a jelly or pâte de fruit, as opposed to spreadable marmalade.

There are two major ways to seal jars of homemade preserves, and a third which is considered unsafe today (sealing with paraffin). The two best methods to seal jars are quite different, but the end result is the same: you are creating a vacuum in the jar to preserve the contents and prevent air and microbes from getting in.

For both methods, start by transferring the marmalade to warm, clean jars, then close them with lids until fingertight, then:

With both methods, the jar lid will likely make a popping sound, a good indicator that the contents are sealed. If you don't follow either of these methods, you will have to store the jars of marmalade in the fridge.

Do I need to boil the marmalade with the seeds?

It's a common misconception that all the pectin of citrus fruit is in. the seeds. In actual fact, commercial pectin is extracted from citrus fruit peel! Ditch the seeds when you are prepping the fruit, and your set will be just as perfect, as long as you use the right ratio of sugar to fruit and you boil the marmalade until you reach the marmalade setting point.

Do I need to add pectin to make marmalade?

You do not need to add pectin or any special ingredients to achieve the perfect set. Citrus that are in season, ripe, but not too ripe, have a lot of pectin in them. No need to add more! Remember that pectin contributes to the set, but also the ratio of fruit to sugar, the cooking temperature, and the pH. Make sure to follow the recipe quantities closely to ensure success!

Why is my marmalade is runny?

If you did not boil the marmalade for long enough, then your marmalade will have too much water and will be runny. Make sure to boil the mixture of fruit and sugar for several minutes, until the marmalade is thick, the bubbles look stable (like blinking fish eyes), a frozen plate test shows a dollop of marmalade wrinkles, and the temperature of the marmalade hits 104–105 °C (220 °F). Use several techniques to gauge if the marmalade has boiled enough to ensure the perfect set! Use a fast-reading digital thermometer like this one from Thermoworks.

What do I do if my marmalade is runny?

If after 24 hours, you find your homemade marmalade is runny, you will have to transfer the marmalade back to a big pot and bring it back up to a boil and boil off the water. Boil to the setting point of 104–105 °C (220 °F) and check the set with a frozen plate test.

Why has the peel in my marmalade risen to the top of the jars?

Once you boil the marmalade to the setting point, it's very important to take the time to let the pot of marmalade sit for several minutes before stirring again and ladling into jars. The rest time gives the marmalade a couple of minutes to cool down and thicken, to better suspend the slices of peel in the marmalade.

This recipe makes 5 to 6 jars of 250 mL of lime marmalade. Make sure to prepare 6 jars to make sure you have enough ready when it's time. To prepare jars for this recipe, start with washed jars. Set them on a sheet pan in an oven at 250 ºF, and leave them for at least 30 minutes before filling them. Note that lime marmalade isn’t green, and more of a golden colour. If you want the marmalade to be green, you will likely have to add a drop of food colouring.
Tried this recipe?Mention @bakesomethingawesome or tag #bakesomethingawesome!