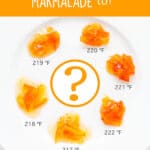 Ever wonder about the setting point for marmalade? Or what temperature do you actually have to boil marmalade to? I investigated how the temperature affects marmalade set and I was really surprised by the results. Check it out!

I cannot stand recipes that suggest that I cook my jam to the "desired consistency" or until it "passes the wrinkle plate test". Say what? How do you know when marmalade is cooked enough?

Let's be honest. If you are not a jam and marmalade expert and if you don't make preserves very often, you will probably lack the experience to see the visual cues of the perfect set. I know that I can't always tell!

I hate guessing games and, as you know, I love to measure everything. And that is how the marmalade temperature experiment was born.

Once you understand the marmalade setting point, your jam-making will get a lot easier!

How do you know when marmalade is set?

How long does marmalade take to set?

In general, once you achieve the right consistency according to your tests and then you have canned your marmalade in jars using a water bath method, you must set the sealed jars aside to cool and it will take 24 to 48 hours for the marmalade to thicken and achieve the final set.

I cooked up a batch of three fruit marmalade, using the whole fruit method (no pectin). I measured the temperature as the marmalade bubbled away with an instant read thermometer, the Thermapen which is very fast at registering temperatures and temperature changes, but a probe thermometer with a longer cable like the Thermoworks Dot would be better because then you don't have to hold it with your hands, which would be much less dangerous to use than my hand-held setup.

I took samples every degree, starting at 217°F and all the way up to 222°F. I chose this range because most of the recipes I perused recommended cooking to somewhere in that range.

As the marmalade boiled and I sampled away, I honestly thought my experiment was a flop. I could not have been more mistaken. Behold, the results!

What is the setting temperature for marmalade (also known as marmalade setting point)?

It turns out there is a significant difference between marmalade cooked to 217°F and marmalade cooked to 220°F. Generally, the setting point of marmalade is 222ºF (which comes out to about 105ºC). Cooked to 220ºF, marmalade will be very thick and will set properly once cooled. But some people don't like to cook marmalade that much and prefer a looser set, others prefer to go a little higher, up to 222ºF. That's entirely up to you.

Here's the impact of cooking temperature on marmalade set:

Do you need to add pectin when making marmalade?

Seville oranges have the most pectin, so a batch of Seville orange marmalade definitely does not require the addition of pectin. But that being said, citrus fruit vary as does their pectin content. As we can see above with my temperature experiment, the marmalade set has a lot to do with the concentration of sugar and the removal of water, and not as much to do with the pectin content.

Is your homemade marmalade not setting or is the marmalade too runny?

How can I fix runny marmalade?

You have two choices to fix runny marmalade if it's not setting properly:

Is your homemade marmalade too thick and chewy? It's overcooked!

As I mentioned, you can save and fix a marmalade that doesn't set properly because it's undercooked by reheating the preserve, bringing it back up to a boil and cooking to 220ºF–222ºF before transferring to sterilized jars and sealing. On the other hand, if you've overcooked a batch of marmalade, there's not much you can do.

Overcooked marmalade has a few characteristics: chewy, tough citrus peel, possibly rubbery and a thick texture verging on dry. I have been guilty of overcooking marmalade when I was trying to determine the set with a plate test: I left the pot of marmalade on the stove, which continued to boil while I was fiddling with the plate test. In those few minutes, the temperature of the marmalade continued to rise, and I ended up with a rubbery marmalade.

Unfortunately, there's nothing you can do to salvage a batch of overcooked marmalade. Of course, you can still eat overcooked marmalade and learn from this mistake. Remember to pull the pan off the heat while you determine if you've achieved the proper set and use an instant-read probe thermometer (like this probe thermometer with a longer cable: the Thermoworks Dot ) to make sure you are able to measure changes in temperature as they happen with little delay!

Is your marmalade gritty with sugar crystals? Find out why!

Undissolved sugar can cause crystallization

When making marmalade, each step serves a purpose and though it might seem tedious, it's important to follow the steps carefully. For example, when you mix the chopped fruit with the sugar, it's very important to stir the mixture on a lower heat setting in order to properly dissolve all the sugar.

The goal is to completely dissolve and melt the sugar. If you don't take time to properly dissolve the sugar at the very beginning of jam-making in general, you risk ending up with gritty crystallized marmalade because sugar wants to crystallize and just a tiny amount of undissolved sugar at this stage can ruin an entire batch of marmalade.

If you didn't properly dissolve the sugar, it's likely that you will notice sugar crystallizing in all the sealed jars of the entire batch of marmalade, before they've been opened. When you open a new jar, you can transfer the contents to a saucepan and heat it on low to warm the marmalade and melt the sugar crystals. Then transfer it back to the jar and store in the fridge.

Some people also suggest briefly microwaving the open jar of marmalade to warm and melt the crystallized sugar.

Improperly stored jars can cause crystallization

It's important to properly close open jars of marmalade to avoid evaporation. If you don't close a jar of marmalade (or jam) properly, the surface may evaporate causing crystallization of the sugar. This isn't surprising given how much sugar you use to make preserves. This concentrated sugary spread is likely to crystallize over time, especially if it dries out.

It's honestly a matter of personal preference, but now I hope that you can better understand your options and pick your favourite marmalade set. I don't think there's a right or a wrong. Well... there's definitely no wrong when it comes to marmalade. I love them all. My favourite was definitely above 219°F. Probably 220–221°F. I love the flavour of the marmalade in this range, and I am happy that it will stay put on my toast. Then again, I cooked a batch of marmalade to 222°F and I love how it's a little darker, with a deeper flavour. In a perfect world, I would have a jar from each temperature on hand, at all times, to suit my mood.

Which marmalade do you think you would prefer?