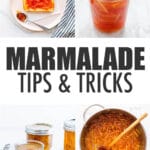 Making marmalade is a very satisfying activity in the winter months during citrus season, but it can take some practice. Here is everything you need to know about making marmalade, as well as a few helpful tips, and answers to frequently asked questions so that you can understand what happens when marmalade-making goes wrong and how to make it right.

Jam is made from a mixture of chopped fruit, sugar, and lemon juice. You can make jam with summer berries (blueberries, strawberries, raspberries, currants, etc.) or orchard and stone fruit (apples, pears, peaches, apricots, plums, etc.).

You only need three ingredients when you make marmalade: citrus fruit, lots of sugar, and a little lemon juice.

Ratio of fruit to sugar

The most common ratio of fruit to sugar is 1 part fruit to 1 part sugar, by weight. You may see a higher amount of sugar in marmalades containing more sour ingredients, like lemon or lime. For citrus that is on the sweeter side, you will likely use slightly less sugar, and for citrus that is more bitter or sour tasting, you may use a little more sugar.

I don't recommend reducing the sugar in marmalade recipes for another reason: marmalade is a balance of sour, sweet, and bitter flavours. You need the sugar to bring out the bitter and sour notes to create a bright, flavourful mixture.

What to use instead of Seville oranges

Seville oranges have a narrow season of just a few weeks and are generally hard to come by in most places. I rarely see them at the market in winter. Use any type of orange you can find to make marmalade, even clementines. I made this orange marmalade with navel oranges from the grocery store.

Actually, you can make marmalade with most citrus fruit, even lemons and limes. Each type of citrus will bring a unique flavour and colour to the preserve.

It's a common misconception that you need to boil marmalade with the pits to ensure you get the perfect set. Actually, most of the pectin is in the peel, not the pits. Toss the pits and focus on the rest of the fruit. Not only does this make the process less finicky, but it also simplifies the process.

I have never saved the citrus pits to add to my pot of marmalade, and I never will. It's just not necessary!

Another common misconception is that you need to add pectin to set marmalade. Actually, citrus fruit are very high in pectin, and most of the pectin is found in the peel. You don't need to add commercial pectin, but you do need to cook marmalade to the marmalade setting point (104–105 ºC or 220 ºF) to achieve the perfect set.

There's one caveat to using temperature to judge set: the reference point of 220 ºF is only valid at sea level. At higher altitude, the set point will be lower!

At sea level, gelling takes place at 220 °F (104 °C–105 °C). So at higher altitudes the setting point may be around 214 ºF or 101 ºC! Any higher, and your marmalade may be dry and pasty because the sugar is more concentrated. It will be darker in colour from caramelization or burning, and the peel may be tough and hard.

There are actually two types of marmalades that you can make and therefore two ways of making them:

In both cases, cases, you are using the entire citrus fruit, peel, pith, juice, flesh, and all to make the marmalade. The only thing that gets wasted is the pits.

And though the thickness of the peel differs between the two methods, the steps are the same:

The steps are easy!

To make marmalade, you don't need much! All you need is

If you choose to process the jars to seal them, you will need a large canning pot with a rack for boiling the jars, as well as a jar lifter. A canning kit is helpful if you choose to boil your preserves to seal the jars. In most cases, you actually can skip this step, instead inverting the closed jars of hot marmalade and letting stand upside down for 2 minutes before flipping right side up. This will create a vacuum and seal the jars too.

If you choose to follow the temperature of the marmalade as it boils, I highly recommend a digital fast-reading thermometer, like the Thermapen One or the ChefAlarm. These are reliable tools that are worth the investment and basically never fail.

How much water do you add to fruit for marmalade?

If you choose to use the whole fruit method, where whole citrus fruit are boiled for almost two hours until very soft, there's no specific water amount to use: you use as much water as you need to keep the citrus immersed and simmering. You will dump off that water and when it comes time to make marmalade with the boiled fruit, you won't add any water and only add the the juices from the fruit.
For the sliced fruit method where sliced citrus fruit are boiled for one to two hours to soften, generally for around 600 grams of citrus, use 6 cups (1.5 L) and for 800 grams of citrus, use 8 cups (2 L) of water. The more citrus fruit you have, the more water you will need. Just remember that once the citrus peel is sufficiently soft, you will likely be left with ⅓–½ of the volume of water.

How long to boil marmalade before it sets?

It's not useful to give a timeframe for how long to boil marmalade, especially as the setting on your stove will have a huge impact on the time it takes. You have to boil it long enough so that it reaches the setting point. It's better to monitor progress using visual cues (watch the bubbles!), as well as the frozen plate test, and the temperature. Remember the setting point is 220 ºF at sea level. It takes as long as it takes to get there!

How do you thicken marmalade without pectin?

Citrus are very high in pectin, which is mostly located in the peel of the fruit. You do not need to add commercial pectin to thicken it. You do need to add quite a bit of sugar, and the amount of sugar will have an impact on the time it takes to thicken marmalade and achieve the perfect set.

How do you know when marmalade is ready?

It's better to use a few methods to monitor progress and to determine when marmalade has boiled sufficiently: use visual cues (watch the bubbles, which will be stable and appear on the surface like blinking eyes!), as well as the frozen plate test, and the temperature. Remember the setting point is 220 ºF at sea level. It takes as long as it takes to get there!

Why is my marmalade not setting?

If you feel like you've been boiling your marmalade and it's still too thin, pause and take a step back. Take the pot off the heat and go over what you've done: have you added the right ratio of fruit to sugar? Is the mixture acidic enough? Are you sure your thermometer is installed and working properly? Does the mixture appear like a thick syrup that has some body to it? You don't want to boil the mixture until it's so thick and caramelized that you can't spread it.

Why is marmalade lumpy?

If you don't stir your marmalade enough while it's boiling, the pectin may not disperse evenly. Citrus is very high in pectin and when you extract that pectin out of the peel and into the pot of marmalade, you have to stir well and continuously to disperse it throughout the mixture. Otherwise, you may end up with clumps or lumps of pectin, which will appear as clear, gelled lumps separated by syrupy fluid.

Why is the peel chewy or hard in marmalade?

If you don't boil the citrus peel in plain water to soften it, the peel will be chewy and hard when you make marmalade with it. You must boil the citrus fruit (especially the peel) for over an hour to ensure that it is very tender. Otherwise when you add the sugar and cook it, the peel will harden and, worst case scenario, become inedible. Once this happens, you cannot fix it. You will have to warm the marmalade to pass it through a strainer and remove the peel.

Why is marmalade thick and pasty?

After sitting for 24 hours, when you open up your first jar of marmalade, if it's too thick and dry, like a fruit paste, it means you overcooked the marmalade. Marmalade is a spread that is thick, but soft and fluid.

Why is my yield lower than the recipe?

Why is my yield higher than the recipe?

If you end up with more jars of marmalade than you anticipated, it may mean that you under-boiled the marmalade and your set may be looser or more watery. Some jam-makers prefer a looser set, but too loose can mean you have too much water and a lower concentration of sugar, which may make the product less stable.

Now that you know everything there is to know about marmalade, try these recipes:

With a small batch of marmalade, you'll have plenty to enjoy with warm homemade croissants or brioche bread, and to use as a filling for jam-filled shortbread cookies, or as a beautiful topping for this orange pie.

Marmalade isn't hard to make, but it can be tricky to get it perfectly right the first time. If you are a beginner, start with the whole fruit method, which is easier and less finicky than the sliced fruit method. Yes, you can start with classic orange marmalade, but I highly recommend you jump off from there to make grapefruit marmalade or even fine-cut lime marmalade. Once you've practiced, the process will become easier and easier.

« How to measure cake pan sizes
How to store cake »