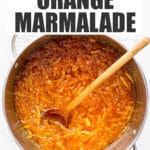 Learn how to make orange marmalade from whole citrus fruit with this easy recipe! All you need are oranges, sugar, and lemon juice to make it.

The easiest way to make it at home

I like to use whole fruit to make marmalade, which makes it so easy and pretty foolproof, dare I say! There are a few basic steps to making orange marmalade using the whole fruit method:

You can make marmalade from any citrus fruit, really. For orange marmalade, Seville oranges are especially popular because of their bitter notes that are a good balance for all the sugar.

Truly though, if you are following a recipe like this one that uses whole fruit, you can use most oranges. I made this batch with simple navel oranges from the grocery store. You can also try to use smaller fruits, like clementines for a different flavour.

Marmalade is really easy to make and actually, you don't need any special ingredients. For this recipe, all you need are oranges, sugar, and a little lemon juice.

The sugar I use is "special fine," which is very similar to granulated sugar. Some may favour superfine sugar or fruit sugar. Both of these sugars have smaller crystals and are faster to dissolve, reducing the likelihood of it crystallizing down the road.

Honestly, marmalade takes a long time to boil, and given the acidity of the mixture, it's unlikely that sugar crystallization would be an issue. Just make sure that your sugar is properly dissolved before you boil the mixture to set it. Start it on low and let the mixture slowly heat up to properly dissolve the sugar before cranking it up to boil it.

Don't use jam sugar in this recipe. It contains pectin and citric acid, both of which are unnecessary here.

This recipe and most marmalade recipes do not require that you add extra pectin. Citrus fruits have a lot of pectin in them, and much of it is located in the skin, contrary to popular belief. You don't need to boil the marmalade with the seeds and as you can see, with this method, the marmalade sets beautifully!

This recipe and method works perfectly with navel oranges or Seville oranges, and I've also used it to make grapefruit marmalade using pink grapefruits flavoured with vanilla bean, and even three fruit marmalade made from oranges, lemons, and grapefruit.

If you prefer a finer-cut marmalade, try this lime marmalade recipe.

You will need a kitchen scale to make marmalade. You need to know the weight of the citrus fruits you are starting with in order to determine how much sugar to use. Most marmalades are made from a 1:1 ratio of fruit to sugar, by weight, if not more sugar than fruit.

To measure the temperature as the marmalade bubbles, I highly recommend using an instant-read thermometer. I use a Thermapen which is very fast at registering temperatures and temperature changes, but it's hand-held. Marmalade splashes so this might not be ideal for you. A probe thermometer with a longer cable like the ChefAlarm would be better because then you don't have to hold it with your hands, which would be much less dangerous to use than my hand-held setup.

To seal the jars, I highly recommend investing in a canning kit, which will make your life so much easier when it comes to making homemade preserves, jams, and marmalades! The kit includes:

How to eat marmalade

Orange marmalade is bittersweet with a very concentrated orange flavour. It is best paired with buttery, rich pastries and also salty foods that will balance out the bitterness of the fruit.

I like to eat marmalade with homemade croissants or this easy brioche recipe. You can also use orange marmalade as a glaze on a pie or tart, like in this orange pie.

Do you need to add pectin?

No, using the whole fruit method, you do not need to add pectin to make marmalade. You also do not need to boil the pits in the marmalade with the fruit and sugar. The pectin is located in the peel/skin of the citrus fruit mostly, contrary to popular belief.

Why didn’t my marmalade set?

If you followed the proportions of ingredients in this recipe and you boiled the marmalade to 104–105 ºC or 220 ºF, then your marmalade should set. If you didn’t boil it to this temperature, you will have to reboil it until you hit the setting point.

My marmalade hit the setting temperature but didn’t set. Why?

Did you use the whole fruit method? If not and if you added a lot of water to your marmalade, that’s the problem. You have a batch of marmalade with way too much water and not enough fruit/sugar. I don’t like recipes that add water to marmalade. They take longer to boil and I find the setting temperature is less reliable for those recipes. You will have to decant the jars back into a big pot and bring the marmalade back up to a boil again. Boil until you see the bubbles become more stable and do a frozen plate test (see above).

How do I fix marmalade that didn’t set or is too runny?

You have two choices to fix runny marmalade if it's not setting properly:
Live with the runny marmalade and enjoy it despite its flaws: Spread it liberally on toast or better yet, spoon it on vanilla ice cream. Serve it with cake as a sauce.
Reboil it: open up all the jars of marmalade, combine them in a pot on the stove, and cook it again up to 104–105 ºC, 220ºF. You will have to go through the process of sterilizing the jars again and canning the marmalade in the sterilized jars in a water bath.

Why is the peel chewy in my marmalade?

If the peel in your marmalade is chewy, you may have either under-boiled the fruit at the beginning, which is important to soften it before making marmalade OR you may have overcooked the marmalade. Overcooked marmalade is thick like a paste and the peel is often quite chewy/hard. It’s hard to fix, but you can still eat it! You could also try throwing it in the food processor to break down the peel if it’s way too chewy to eat...

How long can you store orange marmalade?

If you properly canned the orange marmalade into jars using the boiling water bath technique, you can keep jars of marmalade for years, though the recommendation is usually up to 1 year. Note that after a year, the colour of the marmalade will change with time. It will be darker in colour, and may even turn brown. 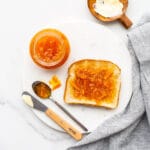