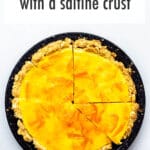 This orange pie is made from a crunchy saltine crust, a cheesecake filling, and topped with an orange curd made with orange juice concentrate for an intense orange flavour. The pie is finished with orange marmalade to glaze the top

Key components to make this recipe

This orange pie recipe has several sub recipes, which can make it feel intimidating. Actually, each sub-recipe is easy enough on it's own. Let's break down this pie into the key components:

To make this pie, I recommend getting the fillings made so that they can cool down enough to fill the pie.

The saltine crust recipe for this pie yields a very sturdy, crunchy saltine crust that is thick and salty-sweet. If you prefer a more crumbly crumb crust, you will have to play with the ratio of ingredients in the recipe.

This is the same crust as for the Milk Bar grapefruit pie. The saltine crust can be replaced with a graham cracker crust, either homemade or store bought, if you prefer.

I brushed the baked saltine crust with melted white chocolate to seal it before filling the pie. The French pastry term for this is "chablonner," where melted chocolate is brushed on the inside of baked tart shells before filling.

Knowing home bakers might not have the same heat-resistant plastic wrap that Tosi uses in her commercial kitchens, and also because the 6x6 pan is very uncommon in home kitchens, I baked the filling in a greased 9x5-inch loaf pan. This worked out perfectly.

Another option might be a glass square pan, but given that glass is slower to heat up, but also retains heat longer, this can be risky in that the filling will take longer to bake, but also may overbake after pulling it from the oven.

The key to this filling is to let the cheesecake bake long enough for it to be almost cooked through, but still raw and very jiggly in the middle. Mine took about 35 minutes to bake at 300 ºF in a loaf pan.

Gelatin to ensure the perfect set

We know from making lemon curd and lemon bars that if you cook your fruit curd fillings to roughly 80 ºC, that the curd will set firm enough that you can use it as a filling and baked goods with a lemon curd, if properly chilled, will slice cleanly.

To further stabilize the filling, you can add gelatin to the curd when it's still warm. The gelatin melts into the curd and completely disappears, but also provides stability and makes the filling more firm so that the pie slices perfectly.

When working with gelatin, remember that gelatin melts around body temperature, roughly 40 ºC. This means a few things:

Gelatin is sold in two forms: as a gelatin powder and as gelatin sheets (also called leaf gelatin). Where I live, the powder form is sold in all grocery stores and the brand is Knox. Most pastry chefs use gelatin sheets, and they are graded as silver or gold, referring to their power to gel. The gold gelatin sheets are more powerful than the silver gelatin sheets. My local market sells Dr. Oetker gelatin sheets and that's what I used for this recipe. You can order them from Amazon.

Whether you use gelatin powder or sheets is entirely up to you, but they are used in different ways:

With both types of gelatin, it's very important to first soften the gelatin in cold water before mixing it with the hot mixture you want to gel.

Orange marmalade is brushed on top of the curd, using the back of a spoon. It acts as a glaze not only to provide shine, but also to add a ton of bittersweet orange flavour to this pie, it also keeps the curd from drying out on top, which is a problem with curds. The orange marmalade seals the curd and protects it so that you can store the pie for several days or even freeze it, without worrying that the curd will dry out or become unstable.

This step prevents the crust from getting soggy. I used it for these Earl Grey panna cotta tarts because the panna cotta filling is quite wet and I wanted to stop the pastry from absorbing all that liquid before the filling sets. To be honest, the saltine crust is so sturdy, I don't think a little moisture from the filling would hurt it. 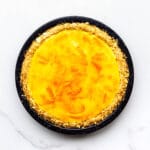 Note if you do not want to use the liquid cheesecake filling, you can skip it and double the orange curd, which will yield the perfect amount to fill your pie crust.
Tried this recipe?Mention @bakesomethingawesome or tag #bakesomethingawesome!