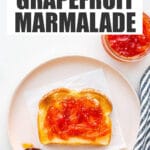 When winter is in full swing, it usually means it's citrus season and time to make marmalade like this homemade grapefruit marmalade. This easy recipe for grapefruit marmalade uses the whole fruit method so you aren't spending hours chopping citrus and separating the peel from the fruit.

You don't need to use pectin when you make a batch of marmalade. The three ingredients for this recipe are really simple:

If you have a little more fruit, that's okay. But try to measure out your ingredients so that they are close to this ratio to ensure that your marmalade will set properly.

Using whole fruit for grapefruit marmalade means you are using every part of the fruit. While other methods will have you separate the outer peel from the flesh of the fruit, the whole-fruit method is also a lot easier to do:

If you prefer a finer cut marmalade, try this lime marmalade recipe, where the limes are sliced before boiling in water, yielding finer slivers of rind, instead of boiling the whole fruit, then slicing, yielding a more rustic marmalade.

I highly recommend investing in a canning kit made up of the smaller tools you will need in order to properly seal your jars, including a magnet to transfer the clean lids to the jars to avoid contamination, as well as a headspace measuring tool to make it easier to verify that you are filling the jars correctly, and a non-reactive funnel that will help you fill the jars without spilling and without dirtying the edges (which would ruin the seal!).

The kit should also come with jar lifters which are so helpful when moving the jars in and out of the water bath! You will also need a big pot preferably with a rack, like this one on Amazon, in order to boil the jars of marmalade for 10 minutes.

In order to achieve the perfect texture, it's very important to boil marmalade just enough so that it is thick, but not so much that the peel becomes chewy. A thermometer like a fast-reading Thermapen helps judge how far along you are in the cooking process and works perfectly with this recipe and method. The Thermapen is what I use. For a hands-free setup, a probe thermometer with a longer cable like the ChefAlarm would be better because then you don't have to hold it with your hands, which would be much less dangerous to use than my hand-held setup.

This recipe works with most citrus fruit, and you can see I've used it to make three fruit marmalade and orange marmalade.

What to serve it with

Grapefruit marmalade is bittersweet so it's important to serve it with enriched breads, like this easy brioche or even homemade croissants.

For this method, you do not need to boil the seeds in the pot with the marmalade. This marmalade recipe will set properly if you follow the proportions as written and boil the marmalade to the right temperature. 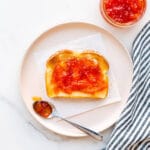 Why won't my grapefruit marmalade set?

If your grapefruit marmalade isn't setting. There are a few things to check: verify the ratio of fruit to sugar you started with (1:1 by weight will ensure a better set); did you boil the marmalade close to the set point (104 °C or 220 °F)? If not, it will be watery.

Can you overcook marmalade?

If you boil marmalade past the setting point, the peel may toughen, but also it will have the texture of a thick paste and may even be difficult to spread. The marmalade will have a darker colour from sugar caramelization. If this happens, you can still eat it, but it won't as good.