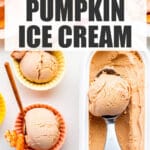 Learn how to make homemade pumpkin ice cream with this easy recipe. The base for this ice cream is a crème anglaise custard, thickened with egg yolks and flavoured with a homemade pumpkin spice mix and pumpkin purée. Great Thanksgiving dessert recipe!

The fall season is all about pumpkin desserts, but instead of the usual cakes and pies, make pumpkin ice cream!

What you need to make it

Pumpkin ice cream tastes just like pumpkin pie, actually! It's a real treat! Here is a rundown of the ingredients you will need to make it:

You can use homemade pumpkin purée or canned. I prefer to use homemade pumpkin purée, which has a better flavour. Just don't use canned pumpkin filling for this recipe because it already has spices added and may even have sugar too. This would throw off the recipe completely so make sure to check the ingredients on the back of the can to make sure that the can only contains pumpkin.

You'll notice this recipe is quite heavy on the spices. You could add less of them or smaller quantities, but I find with frozen desserts, the flavour needs to be bold in order to taste it because it's served very cold, which makes it very hard for flavours to come through.

If you want to modify this recipe or use it as a jumping off points, here are some suggestions:

Really, there are so many ways to modify this recipe. Get creative!

I highly recommend investing in a freezer container for your ice cream. I have a Tovolo ice cream tub that has an elongated shape, giving you ample room to drag the ice cream scoop more easily! The base is non-slip, so you have more traction when scooping and it's double walled for better storage. 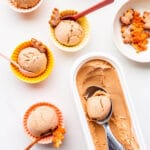