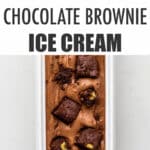 Learn how to make the best chocolate brownie ice cream with this easy recipe. You will make a chocolate ice cream custard base (with egg yolks like a crème anglaise), flavoured with dark chocolate and cocoa powder, and fold in pieces of brownie after churning it in an ice cream machine.

Read up on how to make crème anglaise before making this recipe if you've never done it before!

To make chocolate brownie ice cream, you need the ingredients to make a chocolate custard base and you will obviously need pieces of brownies.

I would avoid incorporating frosted brownies in ice cream. The frosting may be less palatable when frozen. Proceed with caution if your brownies are frosted, or scrape it off before mixing in the brownie pieces.

Blooming the cocoa helps the cocoa powder better incorporate into the ice cream so that it doesn't have a powdery mouthfeel in the end.

Once the cocoa and cream are hot, you can add the dark chocolate and it will melt.

Please read about how to make a crème anglaise if this is your first time. Unlike pastry cream, crème anglaise is cooked low and slow for a longer period on the stove at a low heat setting.

To make the crème anglaise, you start by whisking the egg yolks with the sugar, which is a French pastry term called "blanchir" (which means to whiten or lighten").

The egg yolks should become a pale pastel yellow and the sugar should begin to dissolve.

Heat the milk until it's almost boiling, then pour it onto the whisked egg yolk mixture to temper the eggs.

After cooking the custard on the stove on low to thicken it, the crème anglaise is strained to remove any bits of cooked egg that would ruin the texture of your ice cream.

Combining the chocolate base and crème anglaise

The chocolate base of melted chocolate, cream, and cocoa powder doesn't easily combine with the crème anglaise. You have to use a stick blender to get the two components to mix properly (or use a whisk, but this will take some effort).

Use a stick blender (electric hand blender) to combine the chocolate base and the crème anglaise.

Chill the chocolate custard in an ice bath to speed up the process. You should then chill the custard overnight in the fridge.

Chilling the custard and churning the ice cream

Before chilling overnight in the refrigerator, the chocolate custard will have a lot of bubbles.

After chilling the chocolate custard in the fridge overnight, it will be thick like pudding.

Churn the ice cream in an ice cream maker for about 20 minutes or until it has the texture of soft serve ice cream.

The volume of ice cream plus brownies will likely too big for your ice cream machine to handle. You have to do this step by hand.

Once you have churned the chocolate ice cream, turn off the machine and fold in the brownie pieces by hand. Or you can layer them in your storage container with the ice cream (my preferred method).

Spread a thin layer of soft chocolate ice cream at the bottom of your container to anchor the brownie pieces.

Distribute an even layer of brownie pieces, pressing them into the soft chocolate ice cream.

Note: I use the Tovolo ice cream tubs to store my ice cream. This is what you see in my photos. The total volume of the tub is 1.5 L. Between the ice cream and the brownie pieces, you may need a second smaller 250 mL (1 cup) container to store the leftovers. The final volume depends on the overrun and how much your custard volume increased in the ice cream machine.

There aren't many ingredients in ice cream so substitutions are limited. Here are some options:

Remember with any variations and substitutions, I cannot guarantee the results. You may have to do a few tests and make some modifications. Take notes to learn from the experience!

There are a lot of variations possible with this brownie ice cream:

To make the best homemade ice cream, I highly recommend getting an ice cream machine. When you are shopping, you have three choices:

Ice cream makers with compressors are the most expensive category of ice cream makers on the market. However, if you like to make homemade ice cream, you might want to consider one to make your life easier! The Cuisinart ice cream machine with a compressor built into it has over two thousand reviews on Amazon.

I highly recommend investing in a freezer container for your ice cream. I have a Tovolo ice cream tub. It has an elongated shape, giving you ample room to drag the ice cream scoop more easily! The base is non-slip, so you have more traction when scooping and it's double walled for better storage.

Hardening is inevitable, and it's also an important step when making homemade ice cream. If you don't properly harden the ice cream for several hours in the freezer after churning, the ice cream will be less stable, and prone to melting fast.

Some ice cream makers will add a little alcohol to their ice cream base so that it is softer once frozen. You can try this but be careful: too much alcohol and your ice cream won't freeze and will be too soft to serve! 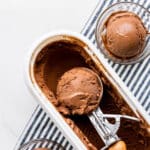 Can I make chocolate brownie ice cream without an ice cream machine?

If you don't have an ice cream machine, you can start with your favourite store-bought chocolate ice cream (either from a local ice cream shop or a grocery store). Simply soften the ice cream enough to be able to scoop some out and layer brownie pieces within.