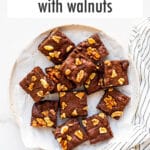 You're either team nuts in your brownies or team without. I am definitely pro-walnuts and this easy recipe for brownies with walnuts makes chewy brownies with lots of walnuts and a rich chocolate flavour from cocoa powder and dark chocolate.

What you need to make these

If you want to make a batch of brownies with walnuts from scratch, you will need the following ingredients:

Types of chocolate to make brownies

Most brownies are made with cocoa powder instead of melted chocolate. The type of chocolate you use will have a big impact on both the flavour and the texture. Dark chocolate will bring both cocoa butter and sugar to your brownies, while cocoa powder is pretty much fat-free and virtually sugar-free (except for the natural sugars from the cocoa bean).

Replacing cocoa powder with dark chocolate in a brownie recipe can lead to results that are too dense or overly sweet, depending on the chocolate you use and if you don't adjust the recipe to compensate for the differences between the two ingredients.

In this recipe, I combine both melted dark chocolate (70 % cocoa solids) and cocoa powder, and you'll notice the recipe has a little less butter than most brownies because dark chocolate contributes some fat.

The resulting brownies have a very chewy edge and a fudgy, but not raw middle. The crust has a chewy/crisp texture.

How to make shiny brownies with a paper-thin top

For many bakers, the shiny paper-thin layer that forms when brownies bake and that cracks when you cut into them is the ultimate brownie goal.

There are a few ingredients and techniques that influence whether or not you end up with shiny brownies:

And if all else fails and you don't get the shiny crust you were going for, remember you can cover the top with a rich chocolate fudge frosting, and nobody will know the shiny top is missing!

There are three different ways to combine/mix ingredients to make a batch of brownies. This mixing method you use may have an impact on the final brownies in terms of texture and looks:

I like to use the one-bowl mixing method to make brownies because it's easy, but in order to compensate for the lack of air incorporated into the batter, I include a small amount of a chemical leavener, specifically baking powder, to help open up the brownie crumb just a little so that it's not so dense.

Traditionally brownies do not contain any leaveners, but I like the texture better with some baking powder. It makes the brownies less dense. Feel free to skip it if you don't want to use it.

This recipe for brownies with walnuts is actually a variation on a brownie recipe I like because it yields very chewy edges. If you like fudge-y or gooey brownies, this might not be the ideal recipe for you. I've used this same recipe to make these brownies with raspberries.

I used a metal brownie pan to bake these brownies. Usually an 8x8 pan or a 9x9 pan. Brownies baked in a glass pan may take longer to bake. Remember that not all baking pans behave the same and you need to account for the material of the pan when adjusting baking times.

If you struggle to cut brownies because they stick to your knife, try using a plastic knife instead of a metal knife! The plastic cuts cleanly through brownies without sticking. You can also use the straight edge of a plastic bowl scraper.

Brownies are great enjoyed as is, but you can also eat them à la mode, topped with vanilla bean ice cream or dark chocolate ice cream. Another favourite of mine is to serve these with Oreo ice cream or mint chocolate chip.

I store brownies in the pan I baked them in. Make sure to cover the pan tightly with plastic wrap or aluminum foil. These store for up to 5 days. They will dry out the longer you store them.

Got leftover brownies? I like to chop up any extra brownies into bite-sized pieces and freeze them in freezer bags. Frozen brownies are extra chewy and make a great snack, or save them to incorporate in the most delicious chocolate brownie ice cream recipe! 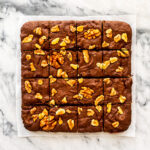 This brownie recipe fits in an 9x9" square pan. Use a metal pan which is a better heat conductor than glass. Brownies baked in a glass pan may take longer to bake. To cut the brownies easily and cleanly into squares, use a plastic bowl scraper or a plastic knife! Don't use a metal knife because it will stick.
Tried this recipe?Mention @bakesomethingawesome or tag #bakesomethingawesome!

Fun fact: the opposite of a brownie is a blondie. Try these easy bar recipes, including toffee blondies and these raspberry and white chocolate blondies.

Brownies are made from a simple list of ingredients and your substitution options are limited. Here are some places where you can deviate:

What are the best nuts to put in brownies?

You can incorporate any type of nut in brownies but, personally, I prefer walnuts or pecans.

Should you toast walnuts before baking them in brownies?

Toasting nuts is optional most of the time when you bake. However, toasting the walnuts brings out the oils and the flavour of the nut, giving them a more pleasant taste. If you have the time, toast them!