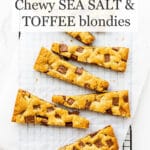 This easy recipe for toffee blondies is made with browned butter and chopped Skor bar (a toffee chocolate bar), and topped with flaky sea salt for a salty toffee cookie bar treat!

The basic ingredients and ratios

Blondies are made with the same basic ingredients as chocolate chip cookies, so you will need:

If you aren't sure the difference between the leavening agents, please read this post about baking soda versus baking powder.

People often look for a more gooey texture with blondies, especially when compared to the classic chewy chocolate chip cookies. To achieve that, recipes for blondies use less flour as compared to the eggs and butter in a classic cookie.

Blondie bars are often underbaked, as with brownies, to achieve a more moist texture in the middle.

A few recipes also use more butter than traditional cookies, 175 grams of butter for every large egg. Again, this leads to a more tender product, though more fat can also make them seem a little greasy.

There are people who treat blondies like reverse brownies, replacing the melted dark chocolate from the brownie batter with melted white chocolate. That's another option to consider, but this recipe doesn't do that.

If you wanted to, you would have to factor the sugar and fat that white chocolate would contribute to the blondie batter, thereby adjusting the amount of butter and sugar you add to the recipe. It can get complicated very quickly if you want to go down that road. So for now, we are making blondies that are a variation of the classic chocolate chip cookie recipe.

Impact of bakeware on texture

While my best chocolate chip cookie recipe calls for the creaming mixing method of room-temperature butter with lots of sugar to achieve a chewy texture, swapping the softened butter for melted butter will help you achieve a more dense, gooey blondie bar. And melting the butter, you can take it one step further by browning the butter, which ups the flavour of the bars significantly, adding a delicate nutty flavour that can't be beaten!

Ultimately, the baking method also has an impact on the texture: because blondies are baked in a big square or rectangular baking pan, the pieces in the middle of the pan will be more under-baked, regardless of the ratios you use, because the middle doesn't heat up as much as the edges. If you like under-baked cookies, blondies are the way to go!

Hint the baking pan you use to bake your blondies will have an impact on the baking and the final texture. Use a metal pan so they bake faster and rise taller with a more chewy edge. Read all about baking pans to understand the difference between metal and glass bakeware.

When to take them out of the oven

Just like with brownies, baking blondies can be tricky when it comes to how long to bake them and when to know they are done. Using a skewer to check if they're done baking will help you get a feel for what's going on in the middle of the pan:

Getting creative with the add-ins

Like with most cookies and brownies, the base recipe of the blondie is a blank canvas for adding in different flavour elements:

This recipe has a good amount of salt, so if you aren't into the salty-sweet combo, you might want to skip the finishing salt sprinkled on top before baking, and use about half a teaspoon (whisk it in with the dry ingredients). The brown butter adds a pleasantly subtle nuttiness to the blondies.

To store blondies, place them in an airtight container in a cool, dry place. Alternatively, like with chocolate chip cookies, for longer term storage, you can freeze blondies in a single layer in a freezer bag. Defrost them, one at a time, when a craving strikes. Defrost one blondie bar in a low oven for about 10 minutes (usually at 250–275 ºF). The blondie will end up warm and taste just like it was freshly baked.

If you love blondies, be sure to check out these other easy bar recipes, including brownies with walnuts (with delightful chewy edges) and easy lemon bars that are so tangy! 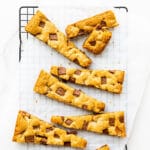 For softer, more gooey blondies, use less flour, as little as 125 grams (1 cup) For a 9x9 brownie pan, the blondies will be thinner and will take less time to bake. Start checking them after 20 minutes to see if they are done! You can also bake this recipe in a 7x11-inch rectangular metal baking pan.
Tried this recipe?Mention @bakesomethingawesome or tag #bakesomethingawesome!

I understand that you might want to bake these blondies with whatever flour you have on hand or make other substitutions.

Fun fact: the opposite of a blondie is a brownie. Try these easy bar recipes, including brownies with raspberries and these brownies with walnuts.