Baking ingredients » How to bake with vanilla 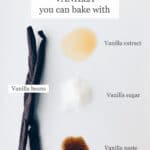 Vanilla is an essential flavour in baking. There are so many ways to infuse your baked goods with the flavour of vanilla, like with vanilla beans or extracts, pastes or powders, sugars, and more. But not every form of vanilla is appropriate for every recipe!

Here's everything you need to know about the different vanilla products available and what recipes to use each of them, as well as a guide to making vanilla substitutions.

Vanilla is a very popular flavour and scent, used in both the food and cosmetics/beauty industry. The flavour of vanilla is sweet, with woodsy and smoky notes. The scent of vanilla is sometimes a little funky with sulfur notes and a little like rum. Depending on the country of origin and the type, some vanillas may be fruity, reminiscent of cherry even.

Given how little vanilla extract you add to most recipes, you might be wondering: is vanilla extract necessary in baking? Absolutely! Though you add small quantities of it to most recipes, vanilla adds sweetness, warmth, and complexity to the flavour of baked goods, especially basic recipes with few ingredients like a simple custard. Without it, many recipes would just taste sweet and one-noted, lacking the depth vanilla brings to recipes.

The vanilla products on the market

Vanilla is a special ingredient. It's a luxury and a privilege that many of us are lucky to have access to. Before you bake anything with vanilla, it's important to understand what the vanilla products available are made with and the best application for each product so that you can get the most out of your vanilla.

Vanilla beans are harvested from orchid plants as long green pods that look a lot like green beans. It's cultivated in Mexico, Indonesia, Madagascar (and specifically the Bourbon Island of Madagascar), and on Tahitian vanilla plantations, among other places. The pods go through a lengthy drying/curing process. It takes months to transform the green vanilla bean into that soft, bright, shiny vanilla bean sold in stores, which is one of the reasons why vanilla beans are so expensive.

You can also make vanilla extract at home with the recipe below, if you have access to vanilla beans.

Vanilla bean paste is sold in jars in specialty stores and some grocery stores and it's very easy to use and a great source of vanilla flavour in baking recipes.

Ask bakers whether they prefer pure or artificial vanilla extract and you will most likely get a passionate response. The fact is that artificial vanilla extract is made with vanillin, one of the main compounds extracted from vanilla beans. Vanillin is what makes vanilla taste and smell like vanilla (along with a few other minor compounds that are also extracted but in lesser amounts, which round out the flavour).

Vanillin is not only present in vanilla. It can also be extracted from clove oil and even petroleum and the waste from the pulp and paper industry, which can surprise people.

McCormick has worked very hard on their imitation vanilla product and just because it's "artificial", does not mean you should avoid it. I'd argue that in some recipes, you should embrace imitation vanilla. And it's definitely worth giving it a try and experimenting with it!

If you want to read the fascinating story of how McCormick developed their imitation vanilla, read the Dorito Effect by Mark Schatzker, available on Amazon.

Another way to make vanilla sugar would be to add a few drops of vanilla extract to a small jar of sugar. Mix it well to distribute the vanilla evenly.

Which vanilla product should you use and when

Depending on the recipe you are making, certain vanilla products may be more appropriate than others. For example, with some recipes, using a whole vanilla bean would be a waste. Find out why:

When do you use vanilla beans in baking?

When making custards for ice cream (like this cherry bourbon ice cream), this is the perfect opportunity to slip in a vanilla bean for added flavour. When you make panna cotta, you can infuse the milk with a vanilla bean before dissolving the gelatin in the hot milk mixture, like in this vanilla bean panna cotta. With vanilla beans, it's really best to use a large volume of liquid and to heat the liquid gently in order to extract the flavour from the bean without damaging the flavour compounds.

How to use them

To infuse a liquid with a vanilla bean, there are a few steps you should take in order to improve the extraction of the flavour into the liquid:

What to do with a used bean

After steeping a vanilla bean in a liquid, you can still reuse it. Rinse the vanilla bean to remove the steeping liquid, then let it dry a few days to remove any humidity and water. I take the dry leftover vanilla bean and place it in a cup of granulated sugar to lightly flavour the sugar.

When to not use them

Save your vanilla beans for custards, sauces, poaching liquids, ice creams, etc. and any recipes that involve making a hot syrup or custard base.

Vanilla extract: when and how do you use it?

Unlike whole vanilla beans which have to be steeped to extract the flavour, the flavour in vanilla extract is already "extracted" (duh!), which means it's the flavour of the bean, in liquid form. Use vanilla extract in recipes for chocolate chip cookies, chewy oatmeal cookies,  vanilla cakes, chocolate chip bundt cake, etc. What these recipes have in common is that there is no step where you could infuse a component of the recipe with a vanilla bean. In fact, many of these recipes (the cookies), don't even include a liquid. Vanilla beans are completely inappropriate for these types of recipes and would be a waste.

Vanilla paste: when and how do you use it?

Vanilla bean paste is not the same as vanilla beans and therefore can't be used in the same way. In recipes that are heated, stir vanilla paste in AFTER heating just like other delicate extracts, while vanilla beans are added BEFORE heating in order to extract flavour. Vanilla paste would work great in Italian meringue buttercream or cream cheese frosting where the flavour would be most appreciated and the flecks of vanilla seeds would be so pretty. Vanilla bean paste would make a great addition in custards and ice creams. Again, just make sure to add the paste AFTER you've taken the mixture off the heat.

Imitation vanilla: when should you use artificial vanilla and how?

Imitation vanilla is controversial and many bakers will put down their foot and flat out refuse to use it. This is foolish, in my opinion. In baked goods like brownies, cookies, and cakes, you can absolutely use imitation vanilla and it will work just fine, if not better. A taste test from the team at Epicurious revealed that sometimes, imitation makes better-tasting baked goods!

I would use artificial vanilla extract with caution in things like custards, pastry creams, ice creams, and panna cotta. These recipes have few ingredients and a lot of the flavour comes from the vanilla. Imitation vanilla might overpower and lead to a medicinal flavour that is over-the-top or even unpleasant in these recipes. If you want to use artificial vanilla in a custard-type recipe, you may want to pull back and use less.

On the other hand, for the Milk Bar birthday cake, Christina Tosi leans in to the artificial extract because that artificial extract will make your frosting taste more like commercial frosting in a can, which is what you want in this recipe. Imitation extract gives commercial baked goods a distinct flavour that can be very nostalgic. Give it a try!

When it comes to vanilla substitutions, it's not an exact science and the results vary depending on the product and the brand you are using. Vanilla paste substitutions are brand-dependant, as some brands may be more concentrated in flavour than others.

Here's a rough guide to get you started. Feel free to experiment and see what substitutions work best for you!

Here are your options for replacing a vanilla bean in a recipe:

Given that vanilla paste is made from vanilla extract mixed with vanilla bean seeds, the paste is as delicate and heat-sensitive as vanilla extract and therefore added after cooking mixtures on the stove, not before (unlike vanilla beans). You will have to adapt recipes according to the product you use.

Here's a guide to replacing vanilla bean paste in recipes:

Pure vanilla extract is a delicate, heat-sensitive flavour agent and therefore added after cooking mixtures on the stove, not before (unlike vanilla beans). You will have to adapt recipes according to the product you use:

Depending on the recipe you are making, the substitute for vanilla extract that you should try will vary and you may need to reach for an alternative to vanilla to replace the extract in your recipe:

Where to buy vanilla products

How to make homemade vanilla extract

You can make homemade vanilla extract by steeping vanilla beans in a small bottle of alcohol. The more beans you use, the stronger the extract will be. Also the longer you let the beans infuse the alcohol, the stronger the flavour.

Try using 6 to 7 vanilla beans per 500 mL of booze. You can use a clear alcohol that imparts little flavour, like vodka, or you can use something with more character, like bourbon, rum, or whiskey.

Note that after about a year of extraction, the vanilla beans may begin to disintegrate, so you may have to strain the extract to use it. For larger batches, increase the number of beans.
Tried this recipe?Mention @bakesomethingawesome or tag #bakesomethingawesome!

Special thank you to Nielsen-Massey and Samantha Frost at Wilks Communications Group for answering my vanilla questions and providing photos for this post.