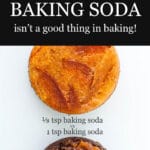 I shared with you a recipe for marmalade pudding cakes, pulled from my family's recipe box. The original recipe had a lot of baking soda, and the puddings browned significantly as they cooked. Like a good chemist, I blamed the baking soda and I wanted to investigate.

I remade the pudding cakes, modifying the amount of baking soda and adding only 0.625 mL (⅛ a teaspoon) to the second batch, instead of the full 5 mL (1 teaspoon) called for in the original recipe. The second batch of steamed puddings were completely different: significantly lighter in colour, with a firmer, spongy texture.

The only difference between the two cakes was the quantity of baking soda. Here's everything you need to know about baking soda, including what it is, what it does, how it works, how to store it, and how to replace it in baking.

Sodium bicarbonate is a chemical leavener, unlike yeast. Yeast is a living organism, and when you feed it (like when you give it some water and some sugar), it too will produce gas, but through a different process known as fermentation: the yeast organisms eat sugar, digest it, and then they produce CO2 (along with other compounds like alcohol).

To summarize, your bread rises because the yeast in the bread dough eat sugar and produce gases, while your cakes rise because baking soda reacts with acids to produce a gas. This is also the principle behind baking powder, another leavening agent.

Now, why does more or less baking soda make the two batches of cake look so different? There's more chemistry to discuss here, like the Maillard reaction.

Browning of baked goods via the Maillard reaction

As you bake a cake or bread, you obviously notice a change in colour as the baked good turns golden brown, but you might also notice that the sweet flavours transform into something deeper, and not as sweet: French pastry chefs like to call this "golden brown delicious." The change in colour/flavour from cake batter to cake occurs because of the Maillard reaction: sugars break down/transform into brown-coloured polymers and aromatic substances that contribute to the aroma and flavour of baked goods.

What happens if you add too much

There's a fine line between the right amount of baking soda and the wrong amount. Make sure to use the right methods to measure your ingredients.

Unfortunately, with more baking soda, a lot of it reacts, but some of it (the excess) is left behind, unreacted. This lingering baking soda affects the flavour, which seems "sharper" and too much baking soda might cause your cakes and cookies to taste soapy even.

The puddings made with a full teaspoon of baking soda taste less like marmalade and more like something stronger than the expected citrus flavour. That's the baking soda. The second batch of puddings had only an eighth of a teaspoon of baking soda, therefore the Maillard reaction occurred much slower. The steamed puddings have a more familiar "golden brown delicious" look to them. The taste of the marmalade is clear, and so is the delicious buttery flavour.

At this point, you would think I'm done with the chemistry chat, but I'm not. I have one more thing to point out about baking soda.

Tenderizing effect and impact on texture

The baking soda raised the pH of the cake batter, thereby weakening the gluten in the flour: the texture and tenderness of the cakes were affected. Weaker gluten means a looser structure, with more spread, bigger air pockets (a more open crumb) and tenderness. So the cakes with more baking soda seemed to rise less, but in fact, that's because the gluten was weak and couldn't support the forming gas pockets. An adequate amount of baking soda (⅛ tsp) allowed the little pudding cakes to rise up and stay up, while an excess of baking soda caused the cakes to spread out, instead of up.

In recipes where that contain large amounts of acidic ingredients, you would need 2.5 mL (½ teaspoon) of baking soda to neutralize 1 cup of a mildly acidic ingredient, like sour cream, buttermilk, or yogurt. For example, this Irish soda bread with raisins is made with 500 mL (2 cups) of buttermilk and 1 teaspoon of baking soda. Of course, this is just a guideline and recipes may vary for other reasons (pan size, presence of "heavy" ingredients like nuts and dried fruit that might require extra leavening, etc.).

The problem with older containers

Given that baking soda will form clumps if exposed to moisture, it's important to store it in a cool, dry place, in a closed container that has a good seal to make sure moisture doesn't get in. Baking soda is often sold at the grocery store in a cardboard box that, once opened, doesn't shut, so you may want to either store the box in a bag with a seal or transfer the powder to an air-tight container with a proper lid. This way air exposure will be minimal and your baking soda won't clump.

Can baking soda be used instead of baking powder?

You can replace the baking powder with baking soda in most recipes, as long as there's an acidic ingredient present in the list of ingredients. If not, you will have to also introduce an acid in your recipes, such as cream of tartar or citric acid (which are dry powders and would be suitable in cookie recipes with baking powder), or lemon juice, buttermilk, yogurt, or sour cream (which are liquids and therefore more appropriate for cakes and muffins).

Is it better to use baking soda or baking powder?

Neither one is better and they have overlapping roles. Which you choose to use will depend on your recipes and your goals. In a cookie recipe, baking soda may be more appropriate to promote faster browning in a short baking time and also to help cookies spread out a little by weakening the gluten structure. In cakes, baking powder is more convenient because it is a complete leavening agent that will react regardless of the pH and the other ingredients present in your recipe.

Can I use baking powder instead of baking soda in cookies?

Baking soda is an important leavening agent in baking. We all use it and it is a vital ingredient in commercial and homemade baking powder. But actually, baking soda does so much more than just cause cakes to rise. Baking soda is alkaline, and as such, adding it to recipes means that it may affect the colour, flavour, and texture of baked goods, as does too much baking powder.