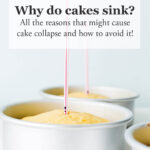 What causes a cake to sink?

Your cakes may collapse if your oven temperature is too low. I always keep an oven thermometer in my oven to make sure that my oven is properly preheated before I put cakes in to bake.

The oven thermometer never leaves my oven. I shift it from one rack to another, as needed, but I rely on the thermometer to tell me what temperature my oven is. This Rubbermaid thermometer on Amazon is under $10!

The heat of the oven is vital for encouraging baking powder to react so your cakes rise but also for the structure of the cake to set. If there's not enough heat to set the crust and the crumb inside, the cake may rise and fall.

Furthermore, if you didn't leave your cake to bake for long enough, your cakes will also sink. For butter cakes, like this vanilla butter cake, I look for certain signs before I remove them from the oven. Here are a few ways to check if your cake is done baking: 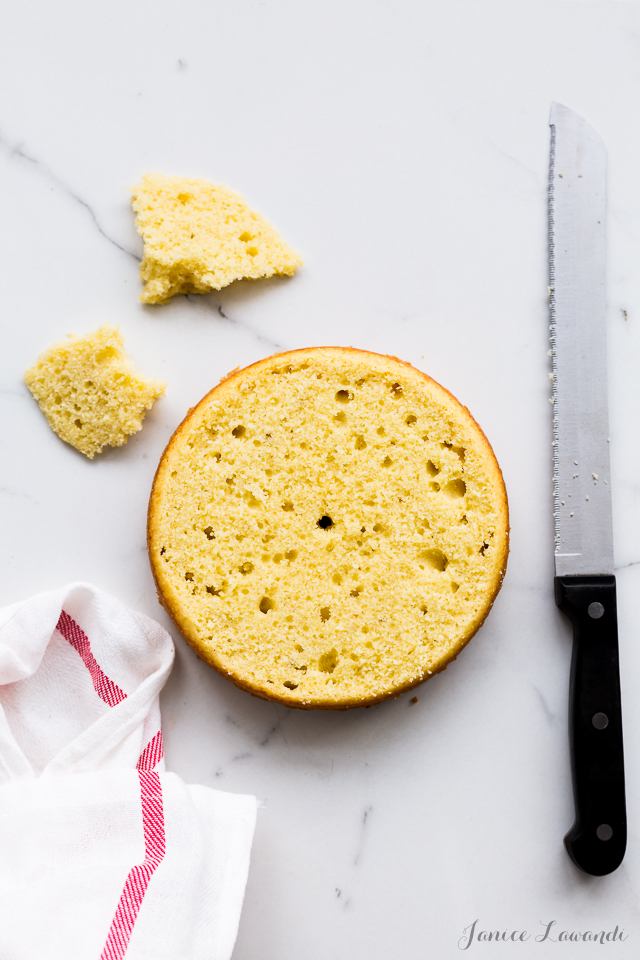 The cake sinks because it lacks structure

If you don't include enough structure-building ingredients in your recipe, the cake may collapse on itself. As the cake bakes, pushed upwards in the pan from carbon dioxide and steam, the cake needs support to maintain that volume and to set the height in place. If not, the cake will collapse on itself. This can even happen in the oven. There are a couple reasons a cake can lack enough support.

Too much of an ingredient can cause a cake to collapse

This relates to a lack of structure too, but if your ingredient ratio in your recipe is off, and there's too much of a certain ingredient, this can be quite disastrous because the recipe has too much of that something and not enough structure to hold it all together. The main culprits in this case are:

Taking a cake out of the oven before it's baked through is also to blame. Are there any other reasons I might have missed that you can think of?

How to avoid cake collapse and cake sinking as they cool?

Knowing how to test when a cake is done baking is essential to successful baking and to avoid cake collapse. It seems obvious but, if you are baking a recipe that you are familiar with and have successfully tested before, your cake sank simply because it wasn't baked enough or because you skipped a step, an ingredient, or maybe you added too much of something. It happens.

If you are baking a new recipe that you aren't familiar with, perhaps there's a typo in the recipe that the author didn't catch and some ingredient is missing (or perhaps too much of an ingredient was listed by accident). This also happens a lot.

For Angel food cakes, cool the cake upside down

There is a trick to prevent sponge cakes like Angel food cakes from sinking: cool these cakes upside down! By cooling the cake upside down, the cake has plenty of room to stretch out of the pan, instead of collapsing into the bottom of the pan.

A science theory about cake collapse:

You might recall, in my post about the best baking and baking science books, I mentioned reading, in "The Science of Cooking," (available on Amazon) that Peter Barham claims to prevent a cake from collapsing as it cools, you have to drop it on the counter. He writes that cakes collapse as they cool because steam condenses in the cake bubbles.

The cake bubbles shrink because air can't get into those cake bubbles to replace the volume lost. Shrinking bubbles means shrinking cake, basically, and the shrinking occurs most towards the middle of the cake because the centre of the cake is softer, while the crust is too dry and stiff to contract.

Barham goes on to offer a way of preventing cake collapse, specifically stating that "Dropping the cake, from a height of about 30 cm on to a hard surface, passes a shock through the bubble walls and allows some of them to break, converting the cake from a closed to an open cell structure. Now air is able to get into the broken bubbles and the cake will not collapse."

Obviously, I had to test this to see for myself.

I made my go-to vanilla cake recipe (that I've modified to make the cardamom cranberry cake and the Earl Grey cake), which happens to make 3 layers of cake. This way I could have my control sample, which is a cake that goes straight from oven to cooling rack without any jostling or dropping, and then 2 cakes that I drop immediately after removing from the oven. Fun times, I tell you!

I used straws and a Sharpie marker to mark the heights of the cake, immediately after baking, and then after cooling. Then I measured the change in height. All the cakes lost a little height upon cooling, but go figure, the cake that wasn't dropped shrank the least (about 1–2 mm), while the dropped cakes shrank about 3–4 mm.

Basically, there was more cake collapse observed if I dropped the cakes from a height of 30 cm. That's exactly what I was expecting and the opposite of what Peter Barham claimed. Cakes are fragile when they come out of the oven. It seems pretty logical to me that if you drop a cake when it's most fragile, it will collapse a little from the shock. Right? I made this "quirky" video for you to illustrate my experiment.

By the way, looking at the inside of this cake, we see that I had large holes in the cake, but writing this post made me realize a few things: given the big bubbles inside and the spotting that I've been observing on the surface of my cakes (look at the 1st photo of this post again), I'm wondering if I'm working with too much leavener in my cake recipe. I use 2 teaspoon baking powder for 2 cups of flour, but according to some baking references, my recipe might only need ½ teaspoon per cup (therefore 1 teaspoon baking powder for 2 cups of flour).

This means, my working recipe might possibly have more baking powder than is needed, specifically double. I have also been wondering if I need a touch more milk/wet ingredients in my recipe. Perhaps the batter is a little too thick and this is leading to pockets of air that can't easily be smoothed or tapped out before baking. All that to say: clearly, I need to make more cakes!