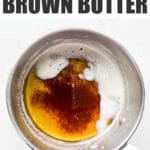 Learn what brown butter is and how to make it for cookies and cakes using this easy recipe! This technique for cooking butter on the stove gives a nutty flavour to the butter and baked goods made with it! Once you learn to make it, you will want to brown butter for many of your baking recipes.

Brown butter (also called browned butter) is a higher fat version of butter, made by browning the milk solids in butter in a process that lends it a nutty flavour.

Brown butter is prized for its complex flavour. French pastry chefs use it to make financiers and madeleines, among other things. You can even make classic chocolate chip cookies with brown butter instead of regular butter.

How to make it

Butter is roughly 80% fat, so there's still 20% to account for. The rest is made up of water and milk solids (proteins and sugars). While we know that oils and water don't mix, butter is actually an emulsion of animal fat and water. They are mixed together to form a very smooth texture and an even mixture.

If you melt butter in a pan on the stove, the emulsion will break. The milk solids will separate from the fat. They tend to settle on the bottom of the pan (though they also form a foam on the surface too). As you continue to heat the mixture, the butter will sizzle as you approach the boiling point of water.

As you heat the melted butter, the water will boil off. The temperature will rise above the boiling point of water, high enough that the milk solids (proteins and sugars) will brown. The browning process, known as Maillard browning, creates flavour compounds that have a complex, nutty flavour. This is why the French call it "beurre noisette." The word noisette means hazelnut, referring to both the aroma and the colour that forms when you brown butter.

Brown butter has a higher fat content per gram than regular butter. Brown butter solidifies just like regular butter when cooled, though the texture is more granular and less supple, probably due to the lack of water.

Some bakers prefer to strain off the browned milk solids, leaving behind the clear, golden butter without any brown or black specks.

There's a fine line between brown butter and burn butter. If you continue to heat butter after the milk solids have browned, they will burn. This will completely change the flavour. If you are unsure of how far to take brown butter, pull the pan off the stove and, using a spoon, push away any foam on the surface of the melted fat. This way, you can see what's happening on the bottom of the pan. The flecks should be brown, like mahogany, not black. If they are black, you have cooked it too long. The nutty flavour is gone in burnt butter. You will have to start over because it may have bitter notes.

Brown butter still has milk solids and therefore is not appropriate for high temperature cooking because it can burn.

The difference between clarified and brown butter

The difference between ghee and brown butter

Ghee is a strained version of brown butter. After boiling off the water and browning the milk solids, you strain the mixture. Line a strainer with layers of cheese cloth to obtain a clear, golden butter free of milk solids. This increases the shelf-life of ghee. Ghee is more stable than brown butter and you can store it at room temperature without it spoiling.

What to make with brown butter

Brown butter has a unique flavour, akin to toasted nuts, but even better. It's really a great way of adding a nutty flavour to cookies and cakes without adding any nuts. You can use brown butter to make a quick caramel sauce like this whiskey caramel sauce served over baked apples.

The nutty flavour of brown butter also makes it great for recipes made with nuts. It complements and accentuates their flavour. You can use brown butter to make your bars and cookies. These white chocolate and raspberry blondies and these toffee blondies are both made with brown butter.

Once cooled to room temperature, you can use brown butter to make frosting, like this brown butter cream cheese frosting. It's the perfect complement for a pumpkin loaf cake or carrot cake. 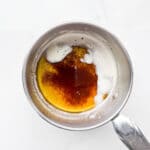 Is beurre noisette the same as beurre de noisette?

Can you replace regular butter with brown butter in baking recipes?

You can replace unsalted butter with brown butter in most baking. Just note that if a recipe calls for 115 grams (½ cup) of unsalted butter, that's actually about 92 grams of fat and the rest water, proteins, and sugars. Brown butter contains no water. You may need to adjust your recipe to compensate for the lack of water in brown butter.