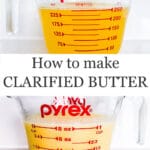 Remember butter is roughly 80% fat, so there's still 20% to account for. The rest is made up of water and milk solids mostly. And while we know that oils and water don't mix, butter is actually an emulsion of animal fat and water, and they are mixed together to form a very smooth texture and an even mixture.

When you heat butter, it melts, and the emulsion will break down meaning the water and milk solids separate from the fat.

Clarified butter is made by melting butter in a saucepan and heating it up enough that the water evaporates and the milk solids separate. These solids can be removed with a spoon and also filtered out using a strainer and a cheese cloth to filter the melted butter and catch the solids. The resulting clear, golden liquid is clarified butter.

The difference between clarified butter and ghee

Ghee is also made by melting butter in a saucepan and heating it up enough to evaporate off the water. The milk solids separate from the hot melted fat, just like for clarified butter, but when you make ghee, you continue to heat the butter until the milk solids brown and caramelize, forming aromatic compounds that have a nutty taste and smell. The melted brown butter is strained through a cheesecloth to remove the browned milk solids and the resulting melted fat collected is called ghee.

Why cook or bake with clarified butter instead of regular butter

Why cook or bake with ghee instead of regular butter

Making clarified butter is easy: all you have to do is heat it up so that it melts, then you skim the milk solids out, while also slowly evaporating the water. 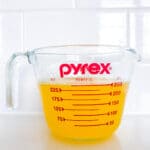 305 grams of butter should leave you with about 200 grams of clarified butter, which is roughly 1 cup. You can store clarified butter at room temperature without refrigeration but if you haven't done a great job of removing the milk solids and boiling off the water, it still may spoil, so for longer storage, keep it in the fridge!
Tried this recipe?Mention @bakesomethingawesome or tag #bakesomethingawesome!