Click here if you want to go directly to the banana pouding chômeur recipe. And if you want to read more about my process and steps to get to this recipe, keep reading. I did a lot of tests to get these rhubarb apple pop tarts just right.

A few weeks ago, Caroline Dumas, a Montreal chef restaurateur and cookbook author,  accused Danny St-Pierre, another chef and cookbook author, of plagiarizing her recipe for pouding chômeur. Apparently, Caroline Dumas had been internalizing her rage over this for many, many years until she was presented with an opportunity to basically blow up publicly on a radio show and accuse him. She was mad. He was confused. From his reaction, it was clear that he wasn't aware of the blunder and that he has a staff behind him and his websites. It seems that somebody from his team goofed and copied/published word-for-word Caroline Dumas' entire pouding chômeur recipe, all the way down to the note at the end that you can add strawberries to the syrup layer. All that without a single credit or link back to her.

To make the situation even more dramatic, the Twitterverse hashtagged it #poudingchomeurgate and all the newspapers and radio jumped on the story. Even a grocery store tried to cash in on the media blitz by labelling their containers of pouding chômeur as "façon Caroline Dumas" or "façon Danny St-Pierre". There were online polls to gauge whose side the public was on. In general, a lot of us felt bad for the way Danny St-Pierre was ambushed on the radio. You'd think Caroline Dumas would have spoken to him beforehand about the issue before exploding on the radio...

Like every other media scandal, #poudingchomeurgate quieted down and apologies were apparently exchanged all around. Still, it amazes me that people don't understand that copying something word-for-word isn't right, especially those working in the media and even worse, those working behind the scenes for big names. On the other hand, #poudingchomeurgate unleashed a whole lot of mocking because a lot of people interpreted that Caroline Dumas was claiming to have "invented" the pouding chômeur, which is clearly not the case. I gather her signature pouding chômeur syrup calls for equal parts cream and maple syrup, whereas traditional pouding chômeurs use brown sugar and boiling water because it was a "poor man's pudding" baked during the Great Depression, and maple syrup costs a small fortune. Her recipe has been published on a few websites and books over the last 10 years, and Martin Picard of Au Pied de Cochon apparently even uses it and has published it himself in his cookbook (of course, crediting Dumas). 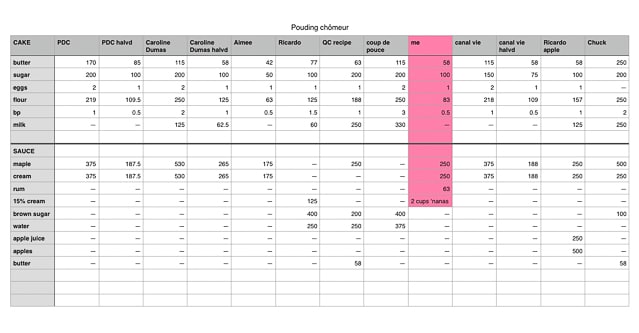 When I was prepping for this recipe, I did a lot of research and math, as usual, and of course, I made a spreadsheet (pictured above). I converted all the recipes into grams/mLs. There are probably hundreds of versions of pouding chômeur with slight variations, and a lot of people seem to use a 1:1 ratio of maple syrup and cream for the yummy sauce hidden beneath the cake layer. Perhaps Caroline Dumas started that trend. I can't say because I don't have the proper tools to research that. In general, nobody's reinventing the wheel here either (including me): it's a basic butter cake recipe dolloped over a pool of syrup. I'm sure they are all yummy, and they all yield some version of pouding chômeur. This one's my latest version to add to the pool: with a boozy maple syrup base reminiscent of bananas foster. I added both vanilla and salt to my cake layer because I think that's important, while most recipes don't (data not included in table).

This is one of many great maple syrup recipes to warm you up as winter drags on and on. It's easy and it's sweet with a good amount of bananas foster flavour and a fluffy cake top. It might not be the prettiest, but it sure hits the spot! If it's rhubarb season, try this rhubarb pudding cake recipe, another easy dessert recipe with fruit baked on the bottom. Or for something simpler, there's always the best banana bread recipe ever.