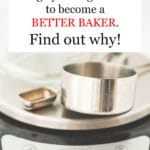 If you are hesitant to make the transition from baking by volume to by weight, here's everything you need to know about why you might want to change your habits and how. There are also some instances when measuring ingredients by volume may actually be more appropriate. You'll find out when in the coming paragraphs.

What's the best way to measure your ingredients in baking?

The tools you use to measure ingredients for baking are a matter of habit, impacted by who taught you, where you learned to bake, and when. Technically speaking, as long as you use your tools correctly and you are consistent with how you use them, it doesn't matter what you use to get the job done, whether that's a measuring cup or a kitchen scale. That's why most of the recipes on this site are given in cups and in grams, to accommodate both ways of measuring ingredients.

Most pastry professionals will bake by weight, but it's not the end of the world if you bake by volume. You can use graduated cup measures and sets of dry cup measurers to measure out your ingredients when you bake, measuring volumes in:

In Canada, the standard for publishing recipes is to record and report ingredient measurements by volume, in cups and millilitres. This is actually redundant when you think about it because you could convert cups to millilitres and back easily, once you know that 1 cup is 250 mL (or 237 mL, depending on the writer and where they are located).

The old-fashioned pound cake is a classic recipe that is weighed: 1 pound of butter, 1 pound of sugar, 1 pound of eggs, and 1 pound of flour. The classic pound cake recipe is easy to remember and easy to scale up or down as necessary to fit the pans you are using.

To weigh your ingredients, you will need a kitchen scale. I recommend this digital scale from OXO, that you can buy on Amazon. The scale has settings for both metric and Imperial measurements, so you can weigh ingredients in grams (my unit of choice) or in ounces (unit of choice for Americans, among others).

Why is it better to weigh baking ingredients

In theory, if you use your tools correctly, there's no reason to change the way you bake, but in practice a lot can go wrong if you choose to measure your baking ingredients with cup measures. The number one reason why I like to weigh ingredients, and specifically flour, is for the sake of reproducibility.

If I develop a recipe and I say that I used 100 grams of flour, there's little room for error when you go to measure the flour and follow my recipe (unless you use the wrong type of flour, or you forget to zero the scale before measuring, or you spill flour onto the scale, but I digress).

The fact is that, depending on what type of measuring cup you use (and the country of origin of your tools) and depending on how you fill that measuring cup of flour, you might end up with as much as 160 grams of flour per cup, if not more if you pack it in, or as little as 100 grams or even less, and that's a significant difference that will have an impact on how your baked goods turn out. Here are some examples from reputable publications to prove my point:

So, as you can see above list, the amount of flour in 1 cup of all-purpose flour can vary from 88 grams all the way to 145 grams, depending on how you fill your measuring cup. And unless you know how the recipe author fills their dry measuring cups, how do you know you are adding the right amount of flour? The short answer is you don't know and this could have a huge impact on your baking results.

So, yes you can bake by volume and your results could be fine. But with some finicky recipes, your results could be skewed if you bake by volume. Whenever I give you a recipe, my goal is that, when you tackle that same recipe, you will achieve a deliciously similar result. I will continue to give you weights because I think it is the best way to convey a recipe. I'll also give you the corresponding volume because I know I can't convert all of you to my way of baking. But don't hate on me if you find your cakes are dryer than they should be!

For small quantities, stick to measuring by volume

I love my OXO kitchen scale, but the model I own isn't reliable for weighing ingredients under 10 grams. I find if I want to weigh out 5 grams of baking powder, sometimes it seems like I'm having to scoop more than other times. That's because the limit of detection of my kitchen scale is probably around 10 grams and though you could weigh less on this scale, you shouldn't because that measurement might not be correct, nor reproducible. And given that most of us don't have kitchen scales that are accurate enough for weighing very small quantities, under 5 grams or even under 10 grams.

Weighing your ingredients is especially relevant when we talk about ratios. On this blog, when I give you a ratio, it's usually by weight, so when I tell you the basic biscuit is a 1:2:3 recipe, it's 1 part fat, 2 parts liquid, 3 parts flour, by weight. In other words, the recipe could be 100 grams of butter for every 200 grams of milk and 300 grams of flour, or 150 grams butter for 300 grams milk and 450 grams flour. It's 1:2:3 by weight. Same goes for cookies: the classic shortbread ratio I use is 1:2:3, meaning it's 1 part sugar, 2 parts butter, 3 parts flour, by weight.

I'm sure there's a little voice in your head that's thinking "how different would it be if I were to measure out the 1:2:3 recipe with cup measurers? It can't be that different!" And I will be honest, that little voice in my head tells me that sometimes too. The trouble is that little voice is WRONG, and I do mean wrong in an all-caps, underlined, bold font kind of way. And, like the good little researcher that I am, I decided it would be best to show you how wrong: I baked an extra batch of the basic biscuit, using the 1:2:3 recipe, but measured by volume instead of weight. My recipe was still 1:2:3, but by volume, which worked out to the following:

I ended up with a dough like this, which reminded me of a thick, wet pancake batter:

The resulting "biscuits" weren't biscuits at all. I ended up making super buttery/cake-y cookies. Not biscuits. Not even close.  Actually, if you convert the 1:2:3 by volume recipe into grams, it works out to:

That is not enough flour to make the resulting dough a biscuit dough. It's a little over half the amount of flour you'd need to make a biscuit with that amount of butter and milk. So, 1:2:3 by weight is completely different than 1:2:3 by volume, and depending on the source of your recipe ratio, you need to verify if the ratio was developed for volumes or weights.

But wait, ratios by volume do exist!

I have more to say on weighing, but in the meantime, I also wrote an article for Food Bloggers of Canada.