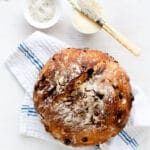 How can you make bread without kneading it?

Most yeasted bread recipes require a full 6 minutes of kneading in a stand mixer, more if done by hand. Kneading untangles the gluten proteins and assembles them into a network that is elastic, stretchy, and pliable and it is an essential step in bread making. Kneading is what makes bread different than a cake, for example. So how can we get away without kneading bread dough? Cue longer rest periods.

The hardest part of this recipe is the rest period, which is over 12 hours and a very long time to wait when you are craving raisin bread. The rest period is important since you aren't manually kneading the dough.

You can get away without kneading bread dough by incorporating a very long rest period into your bread making. The long rest period allows the enzymes in the dough mixture to break down the proteins in the flour into smaller and smaller pieces. Those smaller pieces are much easier to assemble into an elastic network. All it takes is a few folds of the dough to help the gluten network assemble and develop once those proteins have been broken down.

The basic ratio for this recipe is one-to-one (1:1) by weight as you can see in most recipes. The NY Times recipe calls for instant yeast, but I only had active yeast, so I tried using it by dumping it directly into the flour and I also tried activating it in a little warm water first. I didn't notice a difference so go ahead and dump in the yeast, whatever yeast you are using.

When to add the raisins in bread dough

I deviated from the original recipe by using a mixture of water and milk, a little sugar, cinnamon, and raisins. I broke all the bread rules and dumped all my add-ins at the beginning because given how easy this recipe is supposed to be, there was no fumbling to get raisins evenly dispersed into a dough later. Nope. Just stir everything together with a wooden spoon in a big bowl, cover, and wait patiently for the magic to happen. It will, if you are patient. I do the same when I'm making Christmas stollen bread: I add the raisins to the mixer bowl when the bread is kneaded. It's easier to do so at the beginning than at the end.

I found it a little tough to shape the dough because it's quite floppy, but clearly from my two attempts, you can't see the struggle. It'll be okay. Trust me. Just do it! And if you want your cinnamon raisin bread before tomorrow, try this Irish soda bread with raisins. It's way faster and it doesn't have yeast!

For crusty bread, use a Dutch oven with a lid

To bake this bread, I used this Nordic Ware Pro Cast Traditions 3-Quart Enamel Multipurpose Pot with Cover (available on Amazon) which was the perfect size for this loaf. Worked beautifully, as you can see! It's important to use a baking vessel with a lid. In fact, it's essential.

You'll notice in the recipe, the baking instructions indicate that you bake COVERED for 30 minutes, then you uncover the pot and continue baking without the lid to finish baking. The lid is pivotal to achieving a crusty loaf. By enclosing the bread in a hot, covered baking vessel, the water in the dough will rapidly vaporize and turn to steam. The lid will trap the steam in the pot which will moisten the surface of the bread dough. And since steam is a better conductor of heat, that hot steam will actually do a better job of baking the surface of the loaf of bread, resulting in a faster bake on the edges, which will dry out and become crusty.

It seems counterintuitive that a humid environment would promote crust formation when you bake bread, but it's true. Remember those videos of Julia Child throwing ice cubes into her hot oven when baking baguette? She did that to achieve a better crust on her baguettes!

Please note this post contains affiliate links to Amazon. If you buy a product I recommend, I will get a small commission, and the price you have to pay will not change in any way.