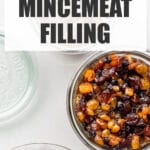 Learn how to make homemade mincemeat filling with this easy recipe. While traditional mincemeat is made with suet, this recipe calls for butter, which is easier to find year round, as well as diced apple, raisins, dried currants, and candied peel. This filling is flavourful and easy to use to fill Christmas pies and tarts.

What you will need to make this recipe

This is a variation on the traditional mincemeat so most of the ingredients are quite standard across all recipes, with a few exceptions. To make this filling for Christmas baking, you will need:

Traditional mincemeat recipes will differ from the one below in a few ways.

Some older recipes are made with suet instead of butter. Suet comes from the fat surrounding the kidneys of cows and also mutton (though in Canada, it's usually from cows). Suet is 100 % fat, whereas butter is only around 82 % fat.

Suet has a longer shelf-life and has a higher melting point than butter. This means it is more stable, especially when stored in the fridge or freezer in an airtight container. If you want to make mincemeat filling up to a year before using it, you are better off using suet and storing the mincemeat in the fridge. Substitute the same amount of suet for the butter in the recipe below and it will work fine.

Nuts, specifically chopped walnuts, are added in some classic recipes. Pecans may also be substituted. I prefer the texture of mincemeat filling without nuts, so this recipe doesn't have them and therefore is nut-free. By all means, you can add chopped nuts to this recipe if you'd like.

By all means, don't feel obliged to add it. You can skip it altogether and the recipe will work great as a filling for mincemeat tarts and pies!

This recipe relies heavily on raisins. I use golden raisins and either sultanas or Thompson raisins and the total volume in the filling for these two is 2.5 cups. That's a lot of raisins. If you don't like raisins, you can try other dried fruit, like chopped dried apricots or even dried cranberries. This will obviously change the flavour a little, but feel free to experiment.

As for the apple in the recipe, I prefer to use a firm apple that doesn't break down when cooked. In Canada, we'd favour a Gala apple, a Honey Crisp, a Granny Smith, or perhaps a Golden Delicious apple or even a Cortland apple could work. Macintosh apples wouldn't work as well in this recipe because they break down and turn to sauce with heat.

If you don't want to use apples, you can replace it with a firm pear variety, which would work well here as well.

What you won't be using in this recipe

The technique used in this recipe is for a quick mincemeat. This means that the mincemeat is heated on the stove to encourage the dried fruit to absorb the liquid, thus speeding up the process. You'll notice with some older recipes, they may not heat the filling and instead are made months or even a year ahead and left to age in sealed jars. Recipes that include aging the filling for months are often heavier on the alcohol and may include more fat than what we have in the recipe below.

This recipe is not made with any thickener. It honestly doesn't need it! You may see some recipes that are made with tapioca starch or quick-cooking tapioca, or even flour. I find the thickener can make the filling too thick and gloopy, and can sometimes interfere with the flavour, so I prefer it without.

Another noteworthy point is that traditional mincemeat was once made with ground meat, also called mince, which is where the filling gets its name. For example, the recipe for homemade mincemeat in The Joy of Cooking calls for ground meat. This recipe is vegetarian (if you use butter) and does not call for ground meat or mince.

Once you've made mincemeat, you can use it to fill mincemeat tarts (which are also callled mincemeat pies or mince pies), instead of using store-bought filling. You can also incorporate it into cookie dough to make mincemeat cookies. Another idea: you could try using it as a filling for rugelach or pinwheels, with a cream cheese dough. 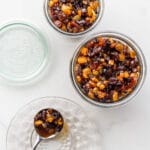