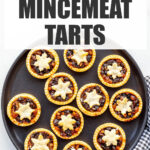 Learn how to make homemade mincemeat tarts from scratch with this easy recipe. This recipe will work with store-bought or homemade mincemeat which is baked in tart shells made from all-butter pie crust. This is a festive Christmas dessert to serve over the holidays!

Mincemeat tarts, also called mince pies or mincemeat pies, are miniature single-serve pies made with a pie dough and a rich mincemeat filling made from dried fruit and candied citrus peel, butter or suet, brown sugar, and warm spices like cinnamon, nutmeg, cloves and allspice. They are often served warm or at room temperature around Christmas time.

Though the name might suggest otherwise, mincemeat tarts are not made with meat, though they can be made with suet or butter.

What ingredients you'll need to make these

Mincemeat pies are quite easy to make from scratch. Here's what you'll need:

The pie dough can be made in the food processor in under 5 minutes. The longest part of this recipe is chilling the pie dough and the tart shells before filling and baking them.

When it comes to mince pies, you have options for how you finish them before baking:

Special bakeware to make these

Like any pie or tart recipe, you will need a rolling pin to roll out the dough. You will also need round or fluted edge cookie cutters to cut the dough to make 22 tarts.

Although these are called tarts/pies, we are using neither pie nor tart pans for this recipe. To bake mincemeat tarts just like these, all you need is a regular size muffin pan! The rolled dough is cut into 3.5" diameter circles (8.9 cm) and carefully fitted into each muffin cup. Note that the dough won't come up to the edge of the pan and only fills two-thirds of the height of the pan.

Personally, I like to top mince pies with snowflake-shaped cutouts of pie dough, so if you go that route, make sure you have a mini star or snowfake cookie cutter to make the decor.

You can also top the pies with a full top crust if you prefer. Just remember to cut a slit in the top crust to vent them and allow the vapour to escape so that the filling doesn't burst out the sides.

Do mincemeat tarts need to be refrigerated

Once baked, you can store mincemeat tarts at room temperature in an airtight container. They don't need to be refrigerated. If your "room temperature" is quite warm, then store them in the fridge or freezer, and reheat them when you want to eat them.

Can you freeze mincemeat tarts?

You can definitely freeze mincemeat tarts before or after baking. I prefer to freeze them after baking. Once the tarts have cooled down to room temperature, you freeze them on a parchment-lined sheet pan until frozen solid, then transfer to a freezer bag for long term storage. Then when you want a tart, you can bake them in a low oven (300 ºF) to defrost/warm them up! Sprinkle with powdered sugar after defrosting, not before.

Served warm, these tarts taste absolutely luxurious because of the bitter, boozy, buttery filling. If tarts aren't your thing around Christmas time, you can always try traditional shortbread, cardamom crescent cookies, and these slice-and-bake fruitcake cookies (which are the easiest of all). Or if you just want cake, you cannot go wrong with this fruitcake recipe. It is THE BEST, which you can use to make these boozy Christmas cake balls if you have leftover cake. 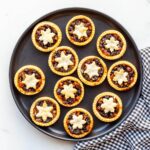