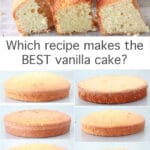 All basic vanilla cakes have the same ingredients: butter, granulated sugar, eggs, vanilla, flour, baking powder, salt, and milk. And yet there are so many vanilla cake recipes in circulation and they can yield very different results.

Variations possible with the ingredients in a vanilla cake:

There are two main ways to make different cakes from the same basic list of ingredients:

Besides using different ratios and mixing methods, there are other variations possible for basic vanilla cakes: the ingredients you use. For example,

It took me a lot of time to choose what recipes to compare. In the end, I tried to stick to recipes with the same basic ingredients, that differed by the way they were mixed or by the ratios. Only one recipe, #6, was VERY different from the others. Here are the cake recipes I tested:

Which vanilla cake recipe is the best?

I can't believe how different these six cakes were when I pulled them out of the oven. Yet the cakes were all so similar, with just a few grams of one ingredient or another that differed between them.

In the end, I felt #3 had a few less air bubbles and a more even texture and appearance, but #3 was also made with a less common mixing method: the reverse creaming method. In the end, the best vanilla cake was #5, and it's become my go-to vanilla cake. I've adapted it over the years to develop this vanilla cake with milk chocolate frosting, this Earl Grey cake with 3 layers of Earl Grey cake, the cranberry cardamom cake with 3 layers of cardamom poppy seed cake, and even a sesame layer cake with raspberries by adding tahini to the cake batter.

How do you make a vanilla cake better?

If you have a favourite vanilla cake recipe, but you still think it could use some improving, here's what can you do to make your recipe better: 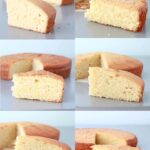 Here are some of my favourite tools to make layer cake recipes like this one (Note As an Amazon Associate I earn from qualifying purchases):