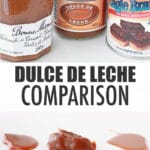 Find out the best store-bought dulce de leche in this comparison of three brands from the grocery store.

Dulce de leche is a sweet, caramelized milk spread that is very common in Latin America. It's also called milk jam. You can smear it on toast, especially brioche, or you can use it as a filling for cakes and cookies.

How it's different than caramel

Dulce de leche and salted caramel sauce are not the same thing. With dulce de leche, milk and sugar (or sweetened condensed milk) are cooked to make a thick, spreadable caramelized milk jam. On the other hand, for caramel sauce, the sugar is cooked alone, sometimes with water and corn syrup or glucose to prevent crystallization. The dairy (cream and/or butter) is added after sugar caramelization occurs.

Caramel has a deeper flavour coming from the burnt sugar notes from the different cooking process. Some love it and some hate it for that reason. Though the processes can seem quite similar, the flavour and outcome of making dulce de leche versus caramel are quite different.

Note that you can further cook caramel sauce to make a thicker filling or soft caramels, and it's likely that you could do the same with dulce de leche.

Ways of making it from scratch

There are several ways of making dulce de leche at home. Some start with cans of sweetened condensed milk, others start from milk and sugar. It's a delicate process to caramelize sweet milk and it takes time. The goal is to darken the colour of the milk to a deep mahogany, while also caramelizing the sugars and milk solids, developing the flavour, and thickening the mixture to a spreadable, thick consistency.

Whether you start with cans of sweetened condensed milk or a combination of milk and sugar, all of these methods work fine. But some require constant stirring and all of them take at least an hour.

You might not have a couple of hours to make dulce de leche, and that's okay! I compared three brands of dulce de leche that were available at my local supermarket to find the best:

Hands down, between the three, there's only one dulce de leche I'd buy again: Eagle Brand. The flavour was great with a sweet, "natural" flavour: no weird tanginess from sodium citrate and no pectin added. However, it was so thin it would just run off a spoon. In the end, I much preferred the Eagle Brand dulce de leche, which I ranked as the best dulce de leche brand, even if it was more of a sauce than a spread.

My solution to the consistency problem: boil it down, stirring constantly over medium–high heat (don't put it on high because it will catch and burn on the bottom, and if you think you are going to get pulled away from your simmering dulce de leche, best to lower the temperature of the stove or do this step later). In about 8 minutes, with constant stirring, I managed to turn the puddling liquid dulce de leche into a very thick caramel. For a caramel that is more spreadable, I'd probably simmer it for 6 minutes.

Tip: If your store-bought or homemade dulce de leche is too thin to use as a cake filling, boil it down to thicken it!

Dulce de leche has a caramelized flavour and a thick, gooey texture. It makes a great spread at breakfast served with this easy brioche kneaded in the stand mixer (after all, it is called milk jam for a reason!). It's also a great filling for cakes and cookies. You can pipe dulce de leche onto cake layers you are stacking to make a layer cake. You can also sandwich it between shortbread cookies to make the most delicious alfajores cookies.

You can keep dulce de leche sold in a sealed jar or can, unopened, for several years, but always check the label for an expiry date (or use by date). Once opened, store the jar in refrigerator. You can keep it in the fridge for up to 2 weeks. 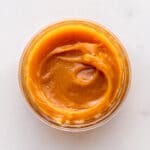 How to thicken dulce de leche

Prevent your screen from going dark
If you want to use dulce de leche to fill cakes or cookies, it has to be thick. Here's a trick for achieving the right consistency in just a few minutes!
Course Condiment
Cuisine Latin American
Keyword thicker dulce de leche
Cook Time 10 minutes
Total Time 10 minutes
Author Janice