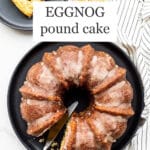 Spiked or not, I think eggnog is wonderful. It's something about that creamy spiciness that has me hooked. Obviously, homemade eggnog is better, but sometimes that's just not an option. Even if I usually only have time to buy grocery store eggnog, it seems so luxurious when I'm sipping on a glass of eggnog on the rocks.

When it's eggnog season, I drizzle it on everything. I even add it to mugs of tea, coffee, hot chocolate (my current beverage of choice), and even an eggnog milkshake.

. I upped the nutmeg in the cake batter because the original recipe only had ¼ teaspoon and I felt it needed more. Feel free to add up to 1 teaspoon of nutmeg for more flavour!

The eggnog bundt cake recipe comes from Flo Baker's book Baking for All Occasions, available on Amazon. The cake recipe is a 1-2-3-4 cake, meaning the baking ratio is 1-2-3-4 by volume: 1 cup of butter, 2 cups of sugar, 3 cups of flour, and 4 eggs. This is the same ratio I use to make this apple bundt cake.

What sets this recipe apart is that instead of using plain milk or sour cream as the liquid in the cake batter, we use eggnog (it can be store bought or homemade). And given that eggnog is rich in egg yolks, the cake batter only calls for 3 eggs instead of 4.

Remember with all bundt cakes, it can be a little tricky to know when they are fully baked. Make sure to use these tricks to check if your cake is done baking before taking it out of the oven!

The glaze is a very crystalline glaze, made with granulated sugar instead of icing sugar. I think it would be great on gingerbread and lemon cakes too. The original glaze contains a lot of sugar, and a mix of water and rum. I opted to replace the water with more rum to give the glaze more flavour. Even with double the rum, the rum flavour was still far from overwhelming. I think it was just right and you mostly taste it on the edges of the cake where it soaked in. Several tasters commented that the rum flavour was just great, without making the cake seem too boozy.

If you wanted a more pronounced rum flavour, a rum extract could work here, but remember with extracts, a little goes a long way.

The crazy thing about this glaze is that it is saturated with sugar granules. So much so that you cannot dissolve all that granulated sugar in the little amount of liquid called for (4 tablespoons). You end up with a magical slurry of sugar crystals in rum.

The mixture can be generously brushed onto the hot, freshly-baked bundt. The sugar glaze melts onto the surface of the hot glaze and forms a crunchy coating. Use all of the glaze. When the bundt has cooled, and the glaze has crystallized, you end up with a thick, sparkly layer of rum glaze, with random trickles that streaked down the sides of the bundt.

If you are looking to bake a bundt cake when it's not eggnog season, be sure to try this cinnamon chocolate chip bundt cake, which is another 1-2-3-4 recipe!

If you have never used a one before, be sure to read this post on how to use a bundt pan before you begin! 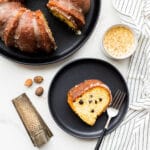 Prevent your screen from going dark
This eggnog bundt cake has eggnog baked into the cake and is topped with a rum glaze that crystallizes on the surface of the cake so that it sparkles!
Course Dessert
Cuisine American
Keyword eggnog bundt, eggnog pound cake
Prep Time 30 minutes
Cook Time 1 hour
Total Time 1 hour 30 minutes
Servings 16
Calories 373kcal
Author Janice

If you love eggnog and eggnog-flavoured desserts, try these: