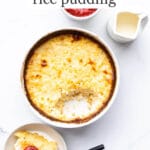 This easy oven-baked rice pudding is made from uncooked rice, whole milk, and sugar, flavoured with cardamom and vanilla bean. It's baked in the oven instead of cooking it on the stove, for an easy hands off approach to rice pudding, served with a quick rhubarb jam. 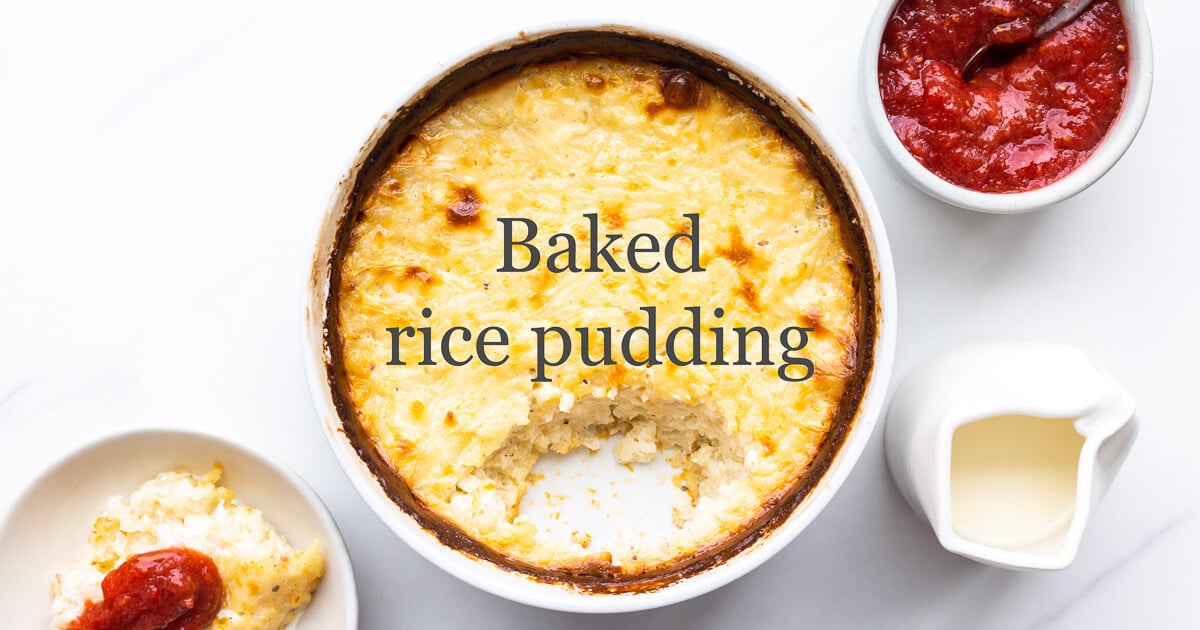 Rice pudding is considered a very old-fashioned recipe. There are a few variations in the ingredients and the cooking methods that allow for some wiggle room, which is probably why rice pudding has withstood the test of time. At some point, rice pudding was so trendy in my city that there were rice pudding shops that were opening up in the downtown core. They would scoop rice pudding the way ice cream parlour's scoop ice cream. It was a thing! 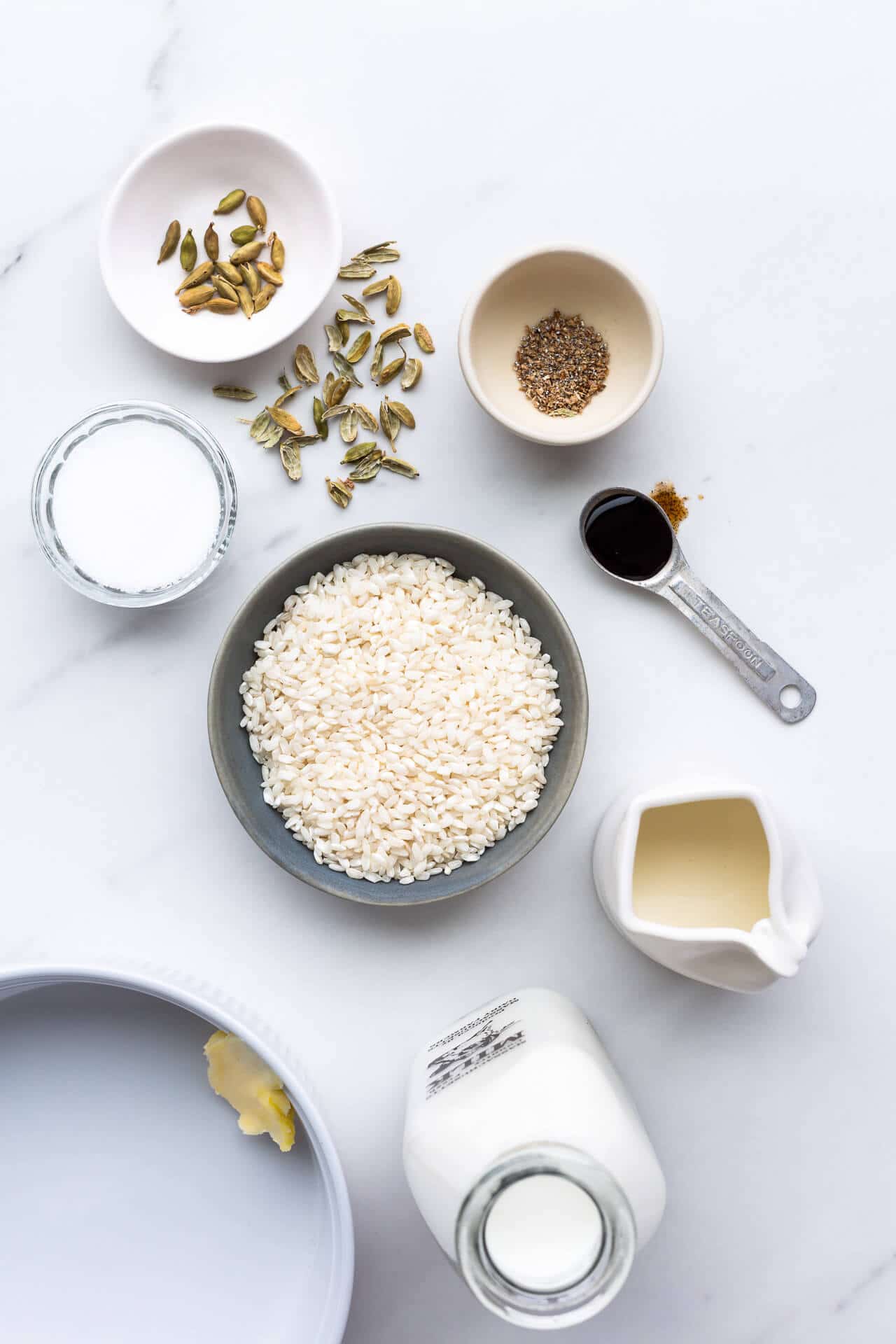 Everybody knows what goes into rice pudding, namely rice, milk, and sugar. Old-fashioned rice puddings often include raisins or currants. They plump up as the rice pudding thickens, turning what can be sad, shrivelled old grapes into plump little morsels. Yum! Though the ingredient list is seemingly simple, there is room for a ton of variation. 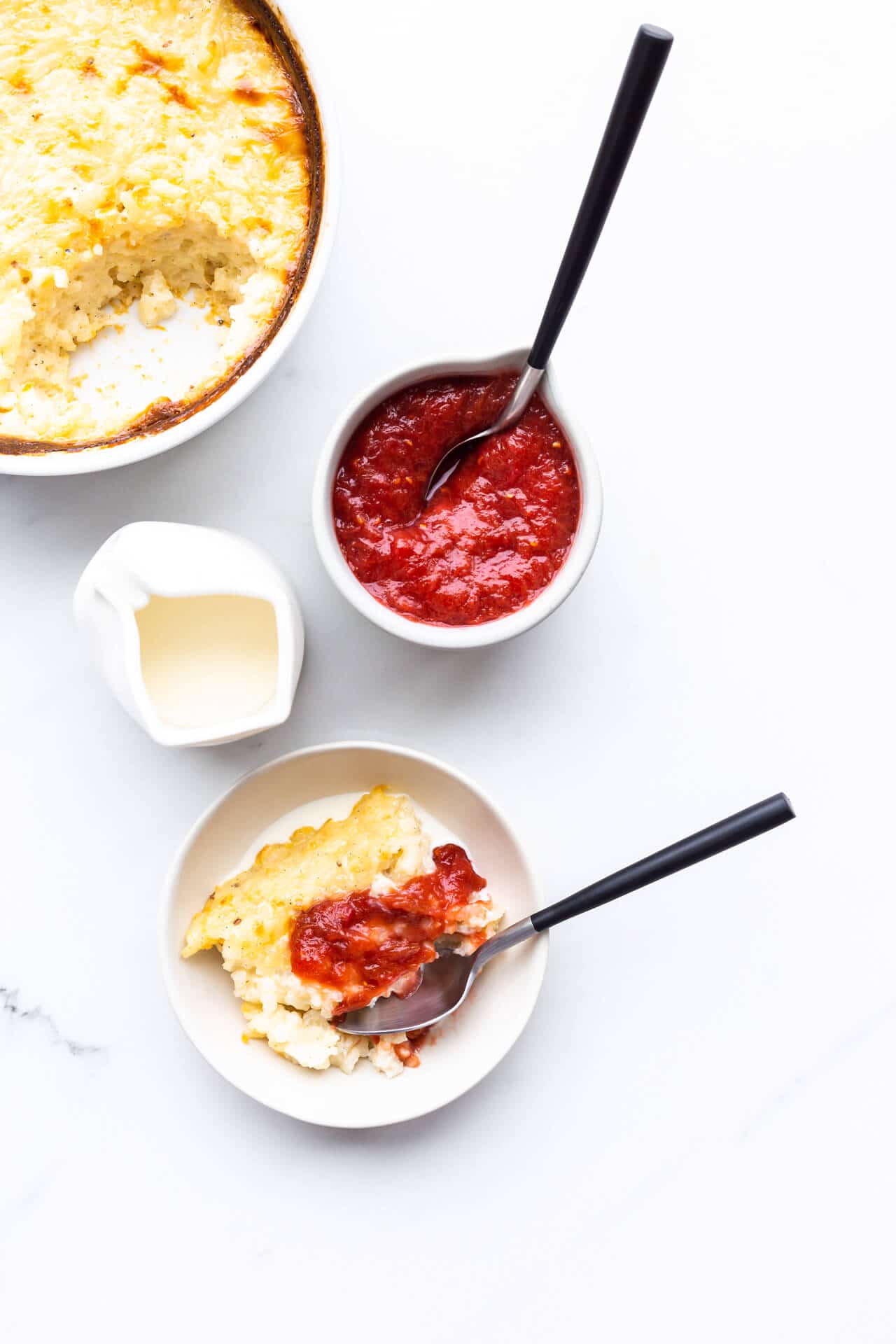 Some rice puddings may include a few egg yolks. That will give your rice pudding a more unctuous texture, a more golden colour, and the yolks will help thicken the pudding, just like yolks help thicken pastry cream and curd. I used this technique for the homemade tapioca pudding.

The rice you use will dictate how much milk you need. If you're making a batch of rice pudding from leftover rice, you hardly need any milk. Equal parts of milk to cooked rice works great. 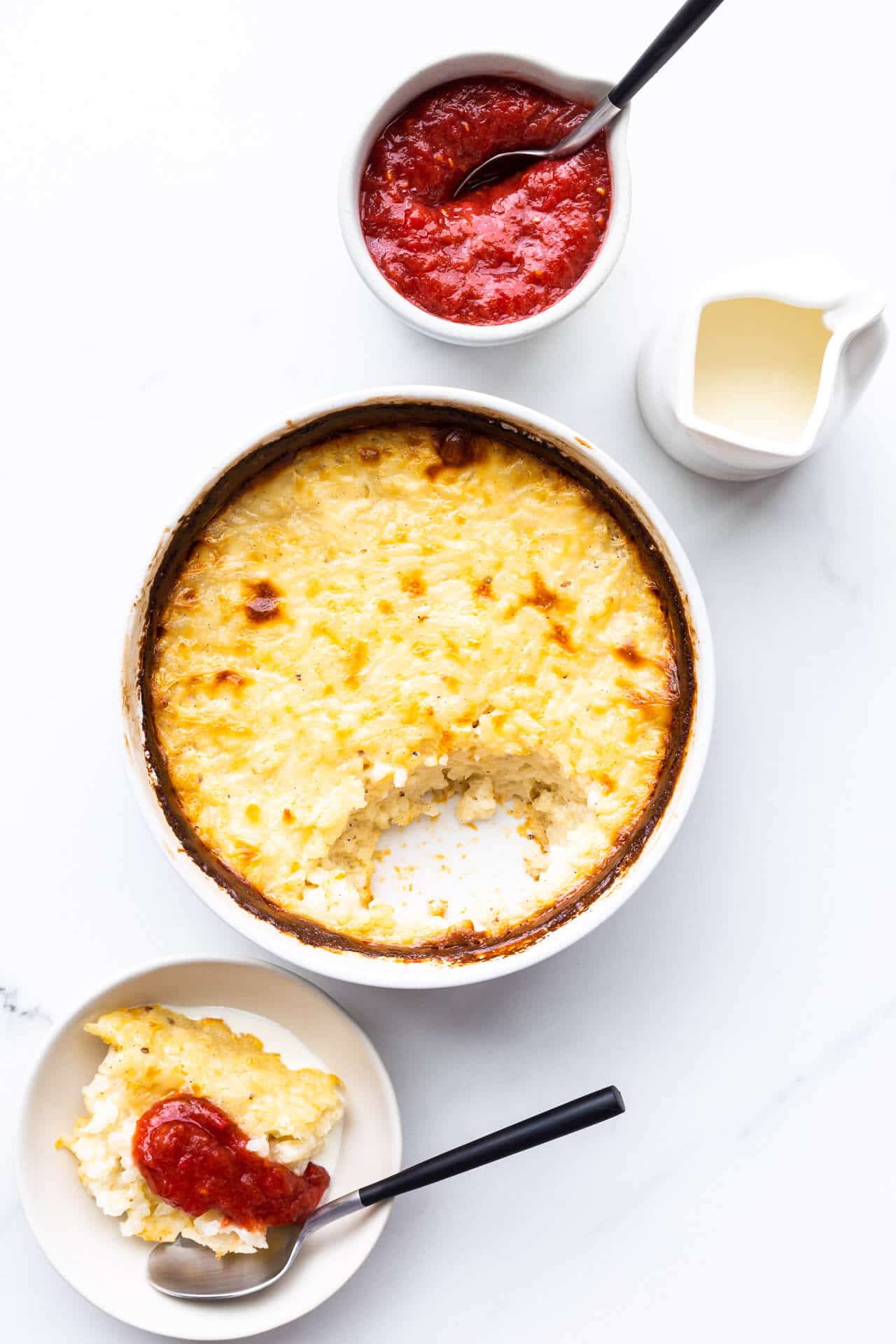 Unlike the golden milk rice pudding that is cooked on the stove from leftover cooked short-grain Calrose rice, the recipe below is for oven-baked rice pudding made from uncooked Arborio rice. It's flavoured with vanilla bean, but a suitable substitute would be vanilla bean paste or even vanilla extract, and also crushed cardamom seeds, which add so much flavour.

Some will start baked rice pudding on the stove, briefly, just long enough to dissolve the sugar and to heat the mixture through before popping the pan in the oven to gently simmer and cook the rice. I find that extra step on the stove is tedious and it doesn't seem necessary. I stir the rice pudding periodically as it bakes so that it doesn't all stick to the bottom. That's it!

Serve rice pudding with jam for an easy comforting dessert. I have served it with a quick rhubarb compote, but it would taste great with any homemade jam (like plum jam or rhubarb jam (no pectin)). The only difference is fruit compotes usually have less sugar than jam. You could also top the pudding with cooked fruit, like roasted rhubarb, wine poached pears, or even this dried fruit compote.

For the rhubarb compote, or any other rhubarb recipes, if your rhubarb is more green than pink, feel free to add in a few raspberries to boost the colour. I did it here and also for this raspberry rhubarb upside-down cake. This trick works well and the raspberry adds a lot of flavour too! 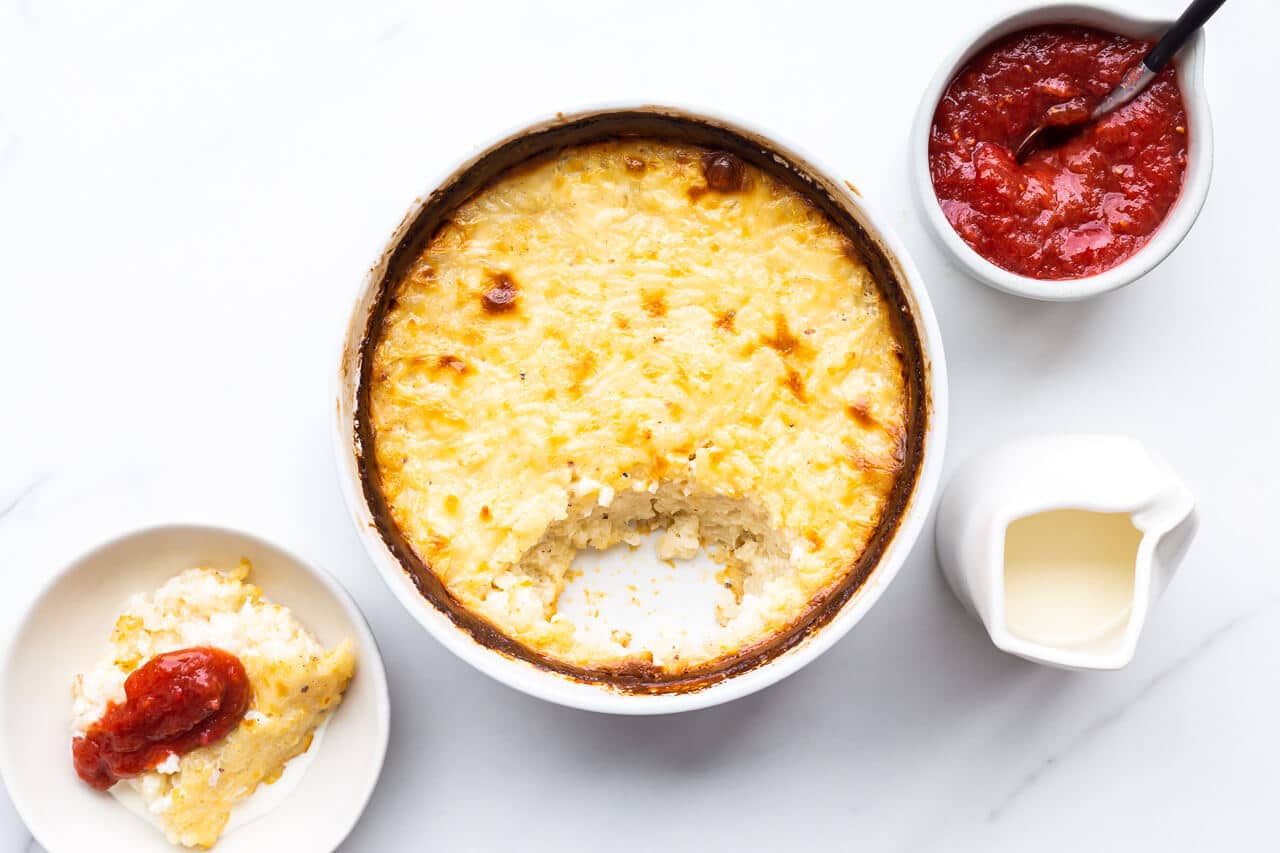 If it's summer, or you can't be bothered with baking or cooking a batch of rice pudding, there's always this rosewater chia pudding to get you through that is an even easier no-bake dessert. 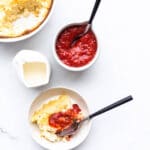