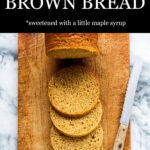 This homemade Boston brown bread is a no-knead bread made without yeast and baked in a maple syrup can instead of a coffee can. It's sweetened with maple syrup instead of molasses for a Quebec twist on the traditional brown bread recipe! 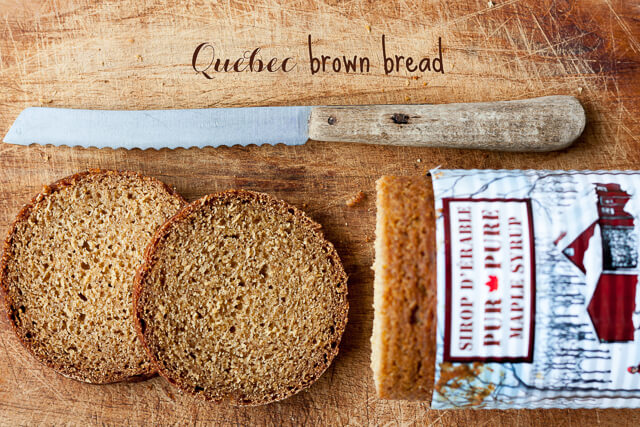 Sometimes I love my inner nerd, and sometimes I kind of hate it. I take something simple, like a recipe from Bon Appétit for Boston brown bread, and then I question it. I turn what should have been a simple baking session into 5 loaves of brown bread, and I often end up with more questions than answers, or the desire to do even more experiments. I can't help it, and as somebody pointed out, my little baking experiments are what make me ME. Ain't that the truth. 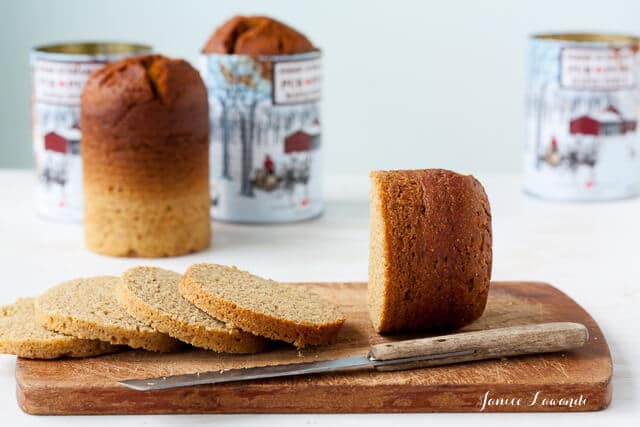 What size can to bake Boston brown bread?

I bookmarked this Boston brown bread recipe that was originally published in a 2012 issue of Bon Appétit. That's a long time to hold onto a recipe. When I finally got around to making it, I had some "issues". The recipe recommends to bake the bread in two 11- to 13-ounce coffee cans. I assumed that Bon Appétit was referring to fluid ounces, therefore cans that are somewhere between 325 and 385 mL, roughly. So, when I Quebecois-ized (Quebecersized?) the Boston brown bread recipe with maple syrup and maple sugar, I figured the two empty 540 mL maple syrup cans I brilliantly have been saving for a special day would be perfect and super cute for this post. Right? Plus, I figured my can substitution would work out well because the maple syrup cans are bigger than those recommended coffee cans, according to my calculations. 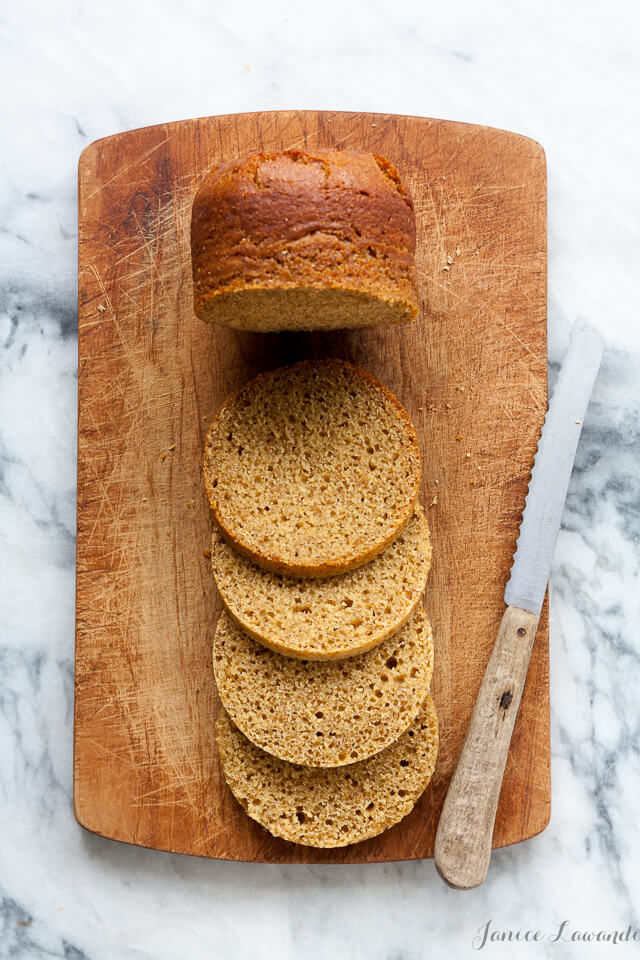 Unfortunately, my logic was absolutely WRONG, but I'm going to share the blame with the magazine. Bon Appétit was referring to American coffee cans that fit 11 to 13 ounces of coffee by weight. I have no idea if it's ground coffee or whole beans, and I'm pretty sure that would affect the size of the cans at least somewhat. So those two empty maple syrup cans that I had been saving weren't big enough to hold all that batter. Suddenly I found myself running around, unsuccessfully googling just how big a coffee can is in the US, searching for a third can, feeling a lot of anger, all while my batter just sat there. I was angry because, in this era where we all have access to a wealth of information courtesy of the magical interweb, you'd think a reputable magazine would consider the fact that an "out-of-towner" might be trying their recipe one day and perhaps, dare I say, might not have access to two 13 ounce coffee cans!

Is that scenario so hard to imagine? Plus, many Canadian coffee companies actually use cans that are a mixture of metal and cardboard, which probably isn't a very oven-safe combination and not too compatible with the water bath that the breads bake in. And I happen to get coffee from a local roaster, and he sells that coffee in paper bags, but I guess that's besides the point... 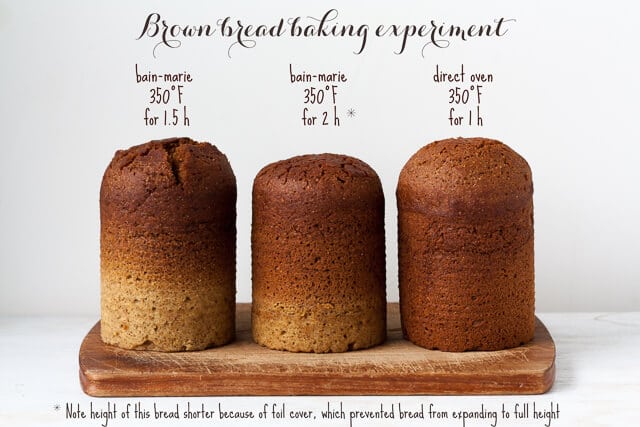 Bread steamed in a can vs baked

Can size aside, most brown bread recipes are baked in cans in a water bath in the oven for several hours but what I found here is that it takes a lot longer than the recommended 1.5 hours to get the submerged area to brown. Even after 2 hours, the browning of the bread still wasn't even. I also tried baking the bread directly in the oven, no water bath, which lead to a more even browning on the outside within an hour of baking, and I don't think the texture was any different from the breads baked in the water bath. So I don't think there's a point to the bain-marie technique, honestly. 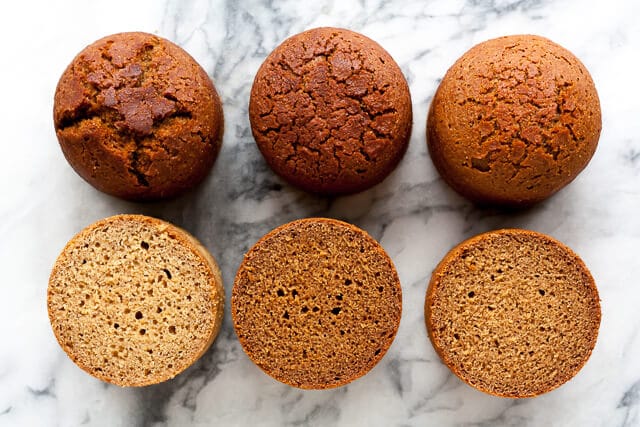 I love this "Quebec-version" of Boston brown bread, flavoured with maple syrup instead of molasses. The flavour and texture remind me of All bran muffins quite a bit. I guess it's the mixture of different flours (rye, whole wheat, and all-purpose) plus cornmeal. It's so easy to make and it's a no knead, no yeast bread, when you look at the recipe. It's leavened with baking powder and baking soda. All you do is stir and bake! It slices beautifully and tastes wonderful with a slathering of salted butter.

Still, I'd like to test out more brown bread recipes, or at least tweak this version here. I want to drastically reduce (if not remove) all that baking soda to see how that affects the flavour, and also to test out if the colour we are seeing is really a consequence of the Maillard browning reactions at alkaline pH or just caramelization. Plus, I'm just not sure a whole tablespoon of baking soda is necessary to get the pH high enough for browning reactions to occur. Recall baking soda is a leavening agent and we know too much baking soda in baking isn't necessarily a good thing. I keep meaning to buy pH paper and now I have yet another reason to invest. Still, this homemade Boston brown bread is a great no-knead bread recipe that I'll add to my repertoire of no-knead breads like the no-knead cinnamon raisin bread and the Irish soda bread with raisins. 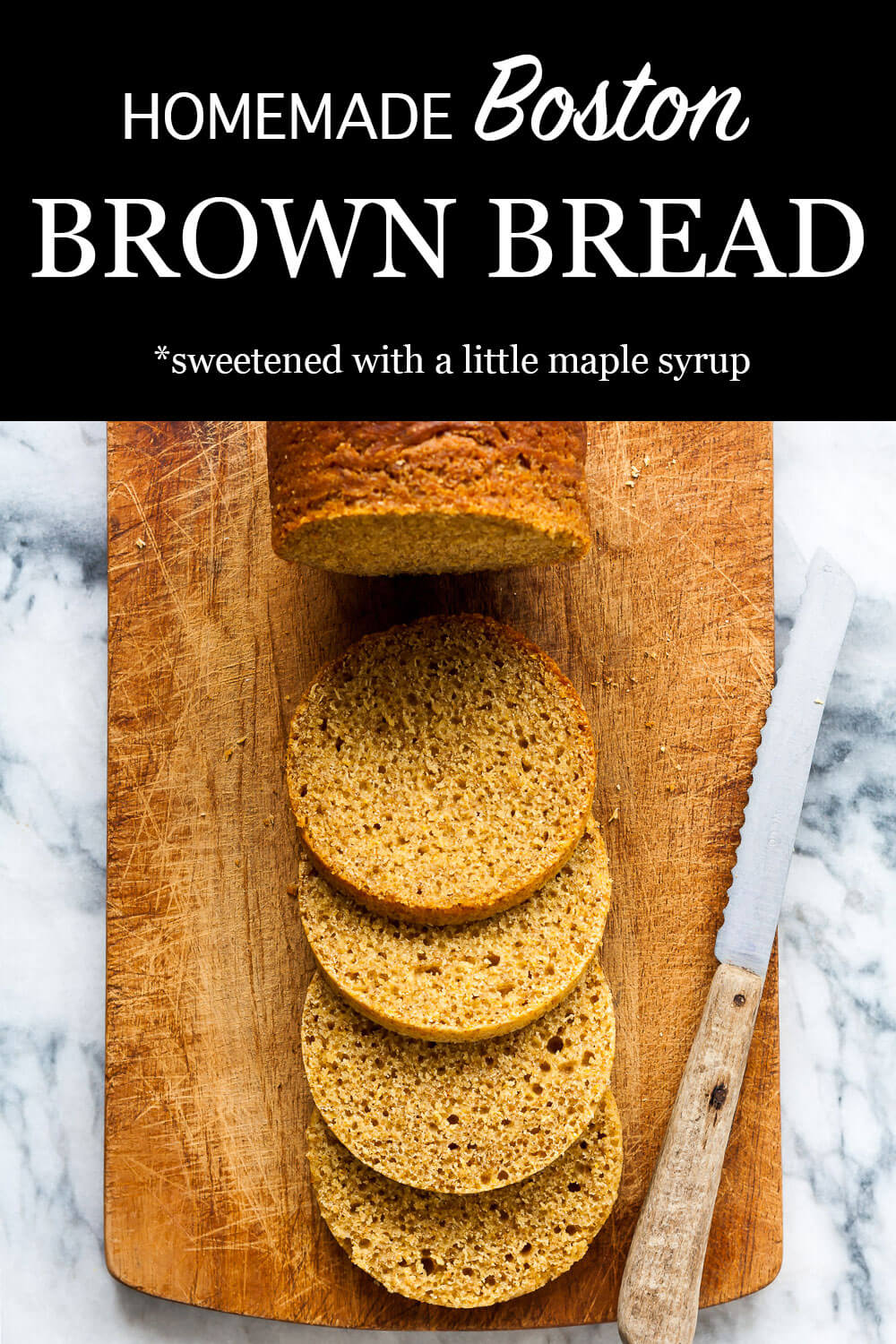 All that to say this is why my letter to Bon Appétit will also suggest that they hire me, and if you are reading my post, editors of Bon Appétit, you can contact me via this form.  If you want to see the results of some of my other baking experiments, check out my cake drop experiment, my sablé cookie experiment, my vanilla cake recipe comparison, and even my marmalade setting temperature experiment.

This Boston brown bread recipe is another type of no-knead bread recipe that comes together like a quick bread or muffin, mixed with a wooden spoon and baked in coffee cans (or maple syrup cans in this case). 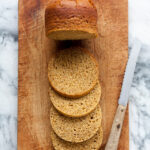 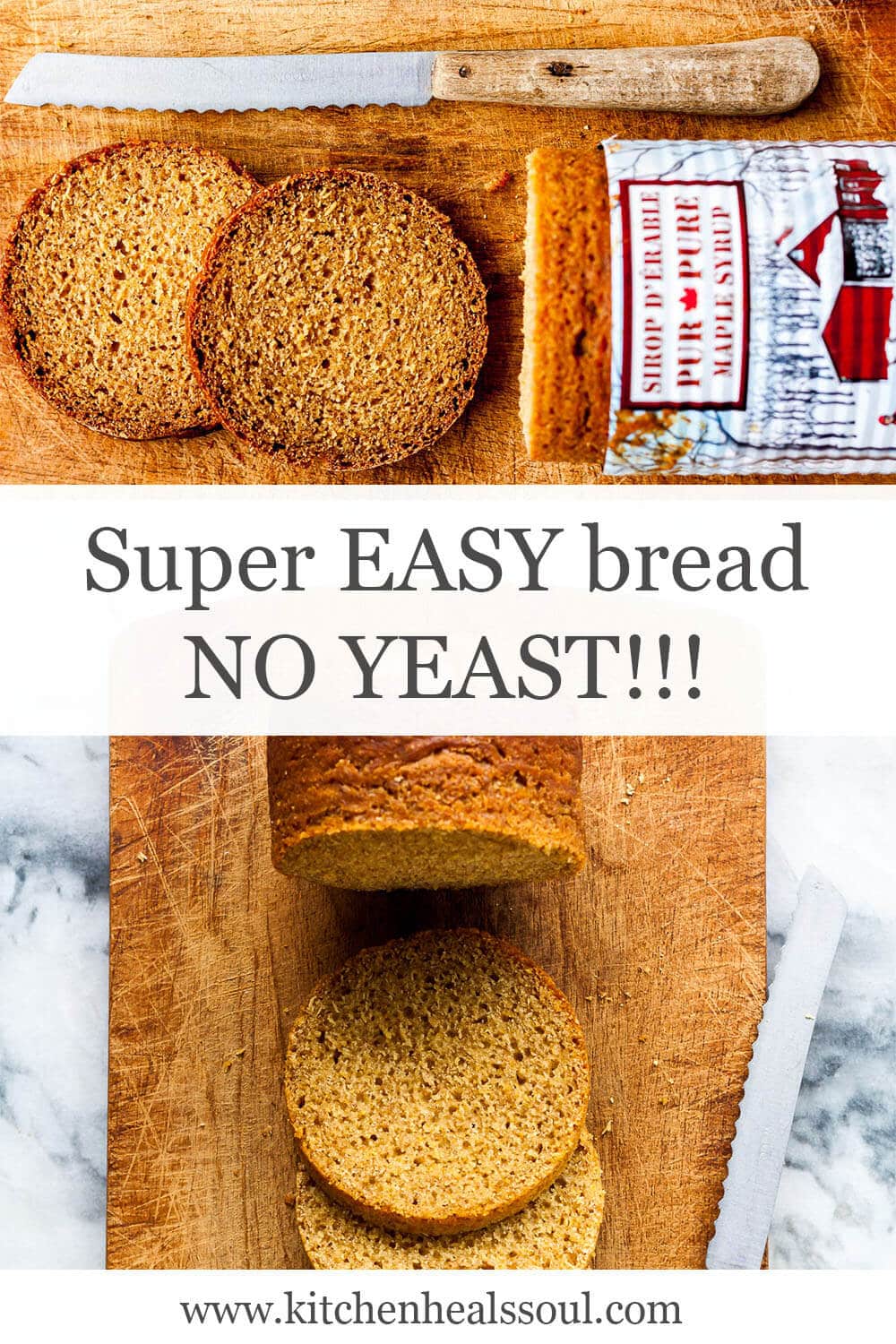