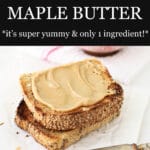 The name maple butter, also known as maple cream, is kind of a misleading name: there's no cream or butter in pure maple butter. Maple butter is a spread made from pure maple syrup that has been boiled, cooled, and whipped so that the syrup crystallizes in just the right way to give it this spreadable smooth, creamy texture.

Maple butter is made through the controlled crystallization of sugar. So, while you are trying to prevent sugar crystallization when making caramel sauces, with maple butter, you are aiming to force the sugar to crystallize in just the right way to achieve the correct, soft, smooth, spreadable consistency. It's readily available in the New England area, as well as Quebec and Ontario, where most maple products are made. In Quebec, it may be labelled as "beurre d'érable."

How to use it

There are so many recipes you can make with maple syrup. You can use maple syrup to sweeten an apple pie. You can use it in this maple fudge recipe or a maple syrup pie. However, maple syrup is quite fluid and "loose" so it doesn't make the best topping or filling in certain instances. This is why maple butter is more interesting in baking: it has less water!

This delicious, creamy, thick maple spread is a more practical way of baking with maple syrup without the mess of dealing with the extra water in the syrup. In instances where you want a maple-flavoured filling, maple butter is what you should use:

Tips and tricks for making it at home

This maple butter recipe is the simplest of the maple syrup recipes and it's made from only 1 ingredient, as a rule: maple syrup. The science behind maple butter is relatively simple but temperature is key to success!

I encourage you to sample after cooling the syrup both before and after the long stirring process because the mouth feel is really quite different, and that's how you know it's "done". However, avoid sampling the boiling hot syrup. It may be tempting, but it'll burn you really badly. Hungry for more recipes with maple syrup, I have a whole category of posts dedicated to baking with maple syrup to explore.

Prevent sugar syrups from boiling over with oil

By adding a tiny amount (¼ tsp) of canola oil to the pot, the chances of maple syrup boiling over are greatly reduced because the oil helps burst the larger bubbles. This trick with oil works with boiling pasta water, though some purists will argue that the little bit of oil may interfere with the sauce sticking to the pasta. I'll leave that discussion for another time.

Troubleshooting: too hard to beat

Temperature is key when making maple butter, just like when you are making maple fudge. Cooking the syrup enough to achieve the right concentration of sugar is key, but the cooling phase is also very important. You need to cool the syrup enough that the sugar will crystallize, but if you cool it too much, it will harden into a block that is impossible to whip.

I use a Thermoworks Thermapen, which can register temperatures and temperature changes within 3 seconds. This means you can catch the maple butter at exactly the right temperature! The Thermoworks ChefAlarm thermometer would be better suited for this recipe because of it's hands-free probe that comes with a pot clip.

If you beat your cooked/cooled maple syrup for a long time and it never forms a creamy, opaque spread, this means the syrup wasn't concentrated enough. Your best bet is to transfer the mixture back to the pot and cook it again.

Maple butter, also known as maple cream, is a creamy spread made from 100% pure maple syrup. This spread is dairy free and vegan. Maple butter can be stored at room temperature in a sterilized mason jar for up to a month, but it's best to refrigerate maple butter to help improve shelf life. 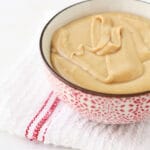 Maple butter spread, also called maple cream, is available where other maple products are sold, but as you can see, you can also make it at home. In Canadian grocery stores, it's either in the aisle with the maple syrup or stocked next to the breakfast spreads (jams, jellies, peanut butter, caramel spreads). In Quebec and Ontario, maple producers usually have stores where you can stock up on maple products, including maple syrup, maple butter, maple sugar, and maple flakes. Farmers' markets in Ontario, Quebec, and the New England area usually have maple stands run by local maple producers where you should be able to find maple butter.